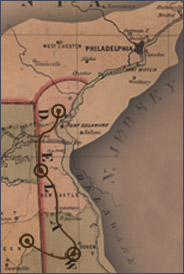 The Hawkins family, the Middletown constable and the slave owner’s agent arrived at the New Castle jail at 2:00am, December 6, 1845. The New Castle sheriff, Jacob Caulk, examined the commitment papers declaring them illegal. The Middletown magistrate did not sign and seal the documents; therefore, the sheriff could not legally hold the family in prison.

At the urging of the slave owner’s agent, the sheriff agreed to hold the entire family in jail until the constable could obtain a legal commitment. The sheriff’s plan was to delay the moving of Emeline and her family until help could be obtained from Thomas Garrett.

Thomas Garrett, Delaware’s most prominent abolitionist and stationmaster on the Underground Railroad, arrived the next day and interviewed Emeline and Sam Hawkins. Garrett reviewed the faulty commitment papers and petitioned the New Castle Court for the release of the family. The Chief Justice of Delaware, James Booth, Jr., reviewed the commitment papers and declared them illegal. Emeline produced a copy of a Maryland will claiming to manumit, or set free, her and the children. Judge Booth chose to accept the document as a copy of a valid will. Since there were no criminal changes pending and no one to claim the family as runaway slaves, Judge Booth declared there was no evidence to hold them and released the entire family to Garrett’s custody. According to Delaware law, in the absence of evidence the “presumption was always in the favor of freedom”.