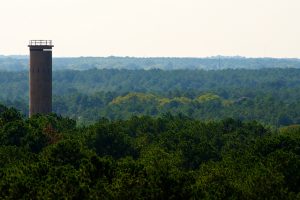 Cape Henlopen State Park, Delaware Seashore State Park, and Fenwick Island State Park are homes to the eleven concrete towers built during World War II. “The Cape Henlopen Lighthouse Reservation” was turned over to the War Department in 1938. It was renamed Fort Miles in 1941 and after the war became an Army training base, a naval facility, a recreational facility, and finally the U.S. turned it over to the State of Delaware and it became a state park.

Fort Miles was constructed using $22 million. It was said to have been not only highly secure, but highly secretive. In 1972, Courtland W. Warrington wrote in “A Mighty Fort Called Miles” that it was “a huge fortress concealed deep in the sand dunes.” The towers were obviously built above ground, but bunkers heavily loaded with artillery were hidden within the sand. Fort Miles was equipped with 16-inch naval guns, 12-inch guns, 8-inch guns, 6-inch guns, 155mm guns, 90mm guns, and 3-inch guns. The weaponry was sometimes mobile, but was also stationary upon swivel carriages, railroad cars, bunkers, and upon cement batteries. Several of the batteries still remain. With all of the guns and ammunition in supply at Fort Miles, not a single shot was ever fired in defense. People along the east coast were positive a raid would come from the Germans, but the attack never came. Fort Miles was guarded by approximately 2,000 troops. Barracks and tents housed the men, while mess halls fed them.

Why was the fort located in the small state of Delaware at Cape Henlopen? There were defensive military forts scattered along the east coast during WWII. The major reason for building Fort Miles at Cape Henlopen was to keep the enemy, Germany, from mobilizing along the beach as the U.S. did at Normandy. Another reason lies in the great wealth up north. Industry in Wilmington, the Naval Shipyard in Philadelphia, and oil-refining in both New Jersey and Pennsylvania were the main importance at the time. The industries were critical to the war effort. Cape Henlopen was the perfect place to guard the shipping channel. Security was important because of German ships and U-boats which wanted to destroy any trade or shipment of supplies to the Allies.

Expected to last roughly ten years, the towers are still standing today. Reinforced poured concrete, sometimes with beach sand added, made up the structures. Each tower took around eight days to complete. Ranging in height from 40 feet as high as 90-feet, the buildings have 1-foot-thick walls and a 17-foot diameter. The horizontal rectangular-shaped slits near the top of the towers were the lookout windows. Further down the structures were vertical rectangular slits which allowed sunlight into the dark interior. A single door was placed at the bottom facing away from the beach. Quality was sacrificed for time which eventually led to the deterioration of the towers.

All of the towers were used for locating and to direct the firing of the guns during an attack. One tower in particular sat seventy feet high upon the great dune. The Pilot Radar Tower, kept by the Pilots’ Association, has remained in decent condition. The tower was restored in 1986 and is very “up-to-date” for its kind. The renovations for the building, including the interior and exterior facade plus new equipment, added up to $500,000. The money came from the Maritime Exchange, the Pilot’s Association, Delaware, New Jersey, and Pennsylvania. Today, high-tech equipment such as computerized ship-tracking devices, radar, and radios are used to monitor incoming and outgoing traffic on the river.

The historic sites are constantly threatened by nature. The winds which carry the sand westerly away from the shoreline are the main point of concern. The beach moves to the west about ten feet every year. Also, as the sand blows, it can break down the surface of the structures.

Storms are another major concern for the towers. Normally surrounded by sand, the towers can become exposed to the saltwater when the beach is under water. Within the last few years, beach replenishment projects have been completed to restore some of the lost sand from over the years. Erosion and storms are a major concern, but the exterior of the towers has held up well. The interior of the towers, however, had metal staircases which have rusted. This is one of the main reasons for not allowing visitors into the structures. Staircases that have not rusted have been cut to prevent anyone from climbing up high. The tower that is open to visitors has a winding staircase with wide steps and railings. The original stairs were almost vertical, very steep stairs. 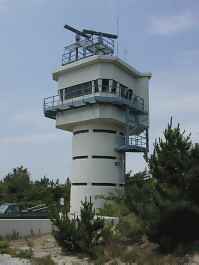