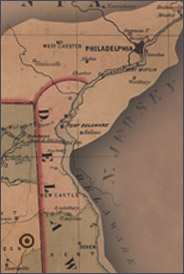 Enslaved Emeline Hawkins lived in the town of Ingleside, Queen Anne’s county, Maryland, with her husband, Sam Hawkins, a free man, and their six children. Her eldest sons, Chester and Samuel, were the property of Charles W. Glanding. Her four youngest children, ages 18 months to 10 years, were the alleged property of Elizabeth Turner. Sam attempted to legally purchase Emeline’s freedom, but was unsuccessful.

Fearing that Emeline and the children would be separated and sold, the family decided to escape for freedom on November 29, 1845.