Located in the historic district of the City of New Castle is the New Castle Court House Museum. Administered by the Division of Historical and Cultural Affairs, it is one of the oldest courthouses in the United States and is a registered National Historic Landmark Site. The original 1732 court is built over the remains of Delaware’s first courthouse of 1689, with additions and modifications throughout the 18th and 19th centuries. All jurisdictions of Delaware’s courts have met in the building including the federal courts. The state courts removed to the City of Wilmington in 1881 with the changing of the county seat, but occasional court sessions and proceedings are still held here. 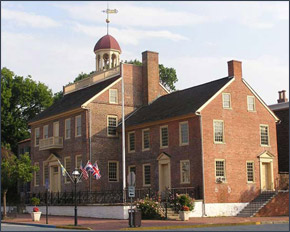 The New Castle Court House was also Delaware’s first statehouse and meeting place of the colonial and first State Assembly. On June 15, 1776, the legislature passed a resolution to separate from Great Britain and Pennsylvania, creating the Delaware State. Two months later, September 20, 1776, the first Constitution for the Delaware State was adopted. In 1777 the capital moved to Dover.

Delaware’s most prominent abolitionists and stationmasters on the Underground Railroad, Thomas Garrett and John Hunn, stood trial before the federal court seated at New Castle on charges of aiding fugitive slaves. The trial was presided over by United States Supreme Court Chief Justice Roger B. Taney. Garett and Hunn were found guilty and fined thousands of dollars, forfeiting their homes, businesses and personal property. But here in the courtroom Garrett would defiantly proclaim that he would continue with his efforts in helping those oppressed by slavery regardless of the cost.