Note: In keeping with Gov. Carney’s guidance for reopening the state in the wake of the coronavirus pandemic, the John Dickinson Plantation is open for tours via reservation only. Go to the following for additional information.

The John Dickinson Plantation, located at 340 Kitts Hummock Road in Dover, Del., is currently featuring “Five Stories,” a series of descriptive panels that explore the lives of a variety of people who lived and worked on the farm of American patriot John Dickinson.

Between 1740 when Samuel Dickinson, a wealthy Quaker tobacco planter and merchant of Talbot County, Md., moved his family to the site on Jones Neck, southeast of Dover, Del., to John Dickinson’s death in 1808, more than 200 people were deeply connected to the plantation including Dickinson family members, enslaved individuals, free Blacks, indentured servants, tenant farmers and tradesmen. “Five Stories” looks to bring some of their experiences back to life.

During its first iteration, which opened on Feb. 13, 2017, “Five Stories” provides information on the lives of family patriarch Samuel Dickinson; Dinah, an enslaved woman owned by Samuel who was later manumitted by John Dickinson; Mary Norris Dickinson, John’s wife; William and Deborah White, tenant farmers at the site; and John Furbee and his brother Peter Patten, free-Black men who rented farmland from John Dickinson. Following are images of the five descriptive panels: 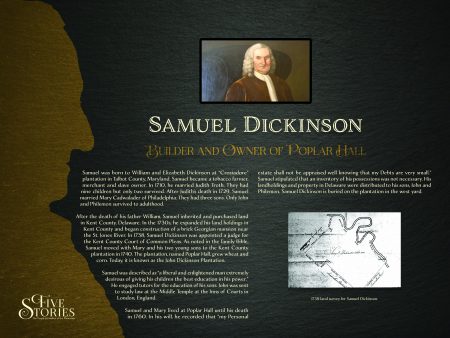 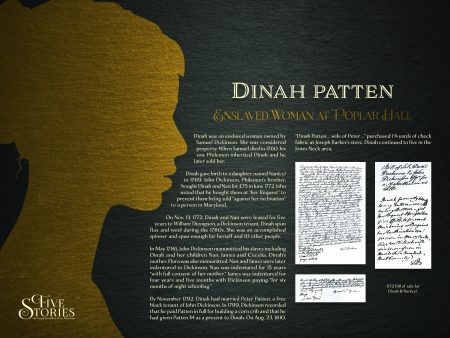 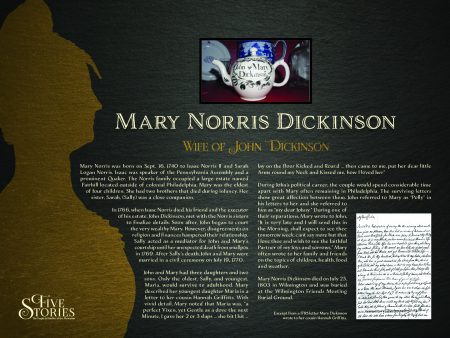 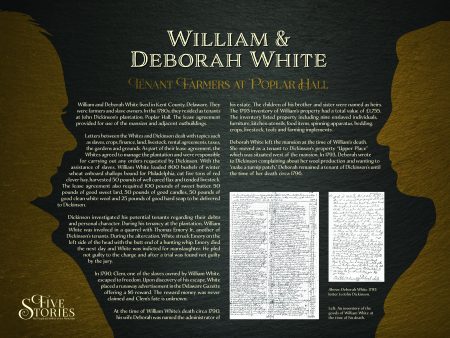 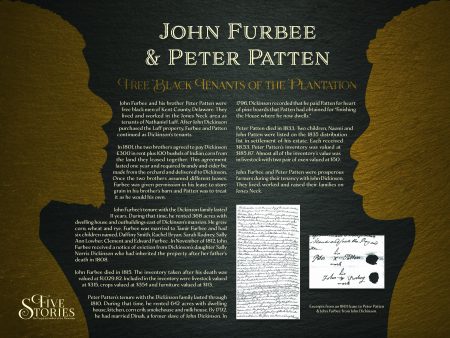 Aside from the Dickinson family itself, information on the people associated with the site is extremely difficult to find. However, thanks to painstaking research by historians, archaeologists and Division of Historical and Cultural Affairs staff members; as well as scholarship conducted under the auspices of the Friends of the John Dickinson Mansion, details about the lives of the plantation’s people have been mined from a variety of places including, among others, the Delaware Public Archives, Delaware Historical Society, University of Delaware and the Historical Society of Pennsylvania. While important information has been gleaned from likely sources such as maps, letters and diaries, it has also been found in more mundane places such as probate inventory, account-book records and bills of sale. As additional information is uncovered through research, new panels will be created that tell the stories of other people who lived and worked at the plantation.

The installation of “Five Stories” is the latest in a series of improvements that have taken place at the plantation’s visitor center since 2010. Originally constructed in the late 1980s, the visitor center is located in a replicated 18th-century-style barn whose interior is infused with the scent of fragrant, undressed wood. Improvements that have taken place in recent years include extensions to the right- and rear-sections of the building, the addition of several windows, upgrades to the restrooms and additional steps that have brought the facility more fully into compliance with the Americans with Disabilities Act.

In keeping with Gov. Carney’s guidance for reopening the state in the wake of the coronavirus pandemic, the plantation is open for 30-minute tours by advance registration only on Thursdays, Fridays and Saturdays at 10 a.m., 11:15 a.m., 1:15 p.m. and 2:30 p.m. In addition, the grounds are open for outdoor visitation only on Wednesdays from 8:30 a.m. to 4 p.m. Admission is free and open to the public. Call 302-739-3277 for reservations and additional information.

The John Dickinson Plantation, Delaware’s first National Historic Landmark, was the boyhood home of John Dickinson, a founding father of the United States, a framer and signer of the U.S. Constitution and “Penman of the Revolution.” The Georgian-style mansion stands as a memorial to this American patriot, legislator and farmer. The museum is a partner site in the First State National Historical Park.