Between Feb. 13 and May 31, 2016, the Seaford Museum, located at 203 High St. in Seaford, Del., hosted “Through the Lens,” an exhibit of photographs from The William D. Willis World War II Photographic Collection. 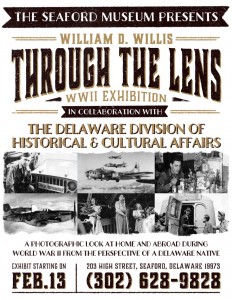 The Willis collection includes more than 650 photographs taken by Dover, Del. native William D. Willis and his colleagues who served as official military photographers during service in Western Europe between 1943 and 1945. In addition to photographs, the collection includes objects that belonged to Willis as well as objects chosen from the state collections and loaned by private lenders to enhance interpretation.

Based on three displays exhibited at Dover’s Legislative Hall during 2015 and 2016, “Through the Lens” featured photographs and objects organized according to the following topics: About William D. Willis, War Production, Prisoners of War, Agriculture, Base Life and Entertainment, and the Home Front. Vignettes from the permanent displays of the Seaford Museum compliment subjects covered in the Willis photographs.

William D. Willis was born on June 14, 1919 in Dover, Del. After graduating from Dover High School in 1939, he worked as a mechanic in an automobile-repair shop in his home town. On May 16, 1941, he entered active duty in the U.S. Army where he received training in Army Air Forces motor mechanics at Fort Devens, Mass. Pfc. Willis served as a mechanic for a year after completing his training and was then transferred to the position of photographic technician with the 9th Photo Technician Unit, taking and developing pictures and handling various phases of laboratory work pertaining to negative processing. He departed for the European Theater of Operations on Aug. 9, 1943 and served there until Sept. 26, 1945. For most of his service, he was attached to the 20th Fighter Group at Kings Cliffe, England.

Willis’ photographic collection, of which only a part was featured in the exhibit, surfaced after his death and was brought to the attention of the Division of Historical and Cultural Affairs which accepted it into the permanent collections of the state of Delaware in 2012.

“Through the Lens,” was planned and created as a collaborative partnership between the division and the Seaford Historical Society. The partnership is one of several in which the division has participated in recent years as part of its Affiliates Program which utilizes professionals from the division staff—including exhibit designers, curators, editors, museum managers, trades-people, archaeologists and historians—who work with history- and heritage-based organizations throughout Delaware to develop joint programs and exhibits, including potential display of items from the state’s collections. The exhibit was curated by Carolyn Apple, a retired Dover physician and CARE Team volunteer, who has been deeply involved in the Willis collection from processing its initial donation to researching, documenting and curating photos; writing display text; and assisting in the installation of the exhibit.