In a recognition ceremony held at the Delaware Public Archives building in Dover on Dec. 5, 2015, Delaware Secretary of State Jeffrey Bullock presented awards celebrating the work of 1,200 participants from 21 schools across the state who took part in the 2015 Delaware Day Fourth Grade Competition. Over the past 14 years, more than 11,000 students have participated in the program. 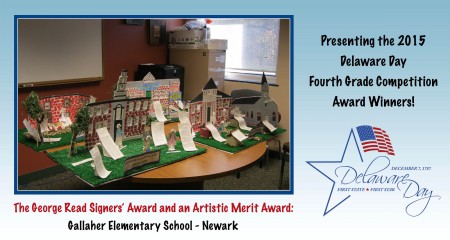 Sponsored annually by Delaware’s secretary of state, the Fourth Grade Competition encourages students to study the Constitution and to discover Delaware’s role in its writing and ratification. Students’ observations are presented in a four-panel display format that incorporates prose, artwork, songs and political cartoons. Each display is reviewed for factual accuracy, spelling and creativity. 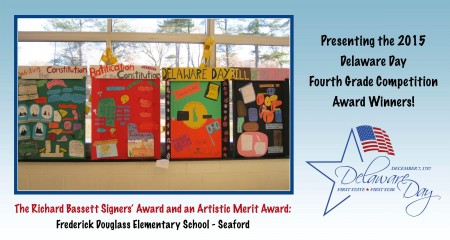 Questions for this year’s competition required students to learn about the five individuals who represented Delaware at the Constitutional Convention in Philadelphia; and explore issues discussed by the delegates; review Article IV (how states are admitted to the Union), Article V (the amendment process), Article VII (the ratification process), the Bill of Rights (2015 is the 225th anniversary of Delaware’s ratification of the Bill of Rights on Jan. 28, 1790), and the petition process by which Delaware Day was established 82 years ago. 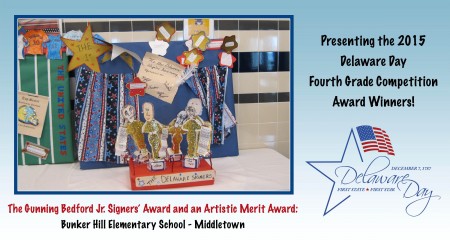 Special Artistic Merit Awards, reviewed by the Delaware Division of the Arts with assistance from the Newark Arts Alliance, were also announced during the ceremony. Schools honored with this award were Bunker Hill, Frederick Douglass, Gallaher, North Dover and Star Hill elementary schools. Artistic Merit Honorable Mention awards were presented to Sunnyside Elementary and Wilmington Friends schools. As part of the Artistic Merit Awards process, financial assistance for up to $50 worth of art supplies was provided to participating schools through a Division of the Arts grant awarded to the Newark Arts Alliance. 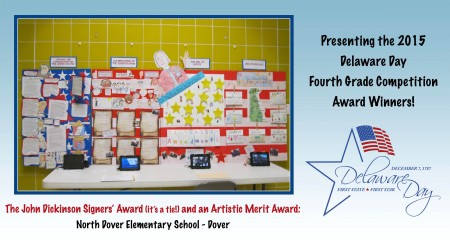 The 2015 Delaware Day Student Competition was planned and organized by Division of Historical and Cultural Affairs’ historian and National Register coordinator Madeline Dunn in consultation with representatives of Delaware’s departments of State and Education. Participation by other Division of Historical and Cultural Affairs staff-members included service as judges of the student-developed projects, development of awards certificates and printed materials, set-up of the awards-program location and staffing at the event.

Go to the following for photographs of displays created by participating schools.

Go to the following for information about Delaware’s signers of the U.S. Constitution and a Survey of Historic Sites and Buildings associated with the signers.