Beginning on April 3, 2014, The Old State House, located at 25 The Green in Dover, Del., will be offering a new series of history lectures that will be held during the time period just after people have left work for the day. Focusing on Delaware-history topics, the lectures will take place between 5:30 and 6:30 p.m. on selected Thursdays in April, 2014. 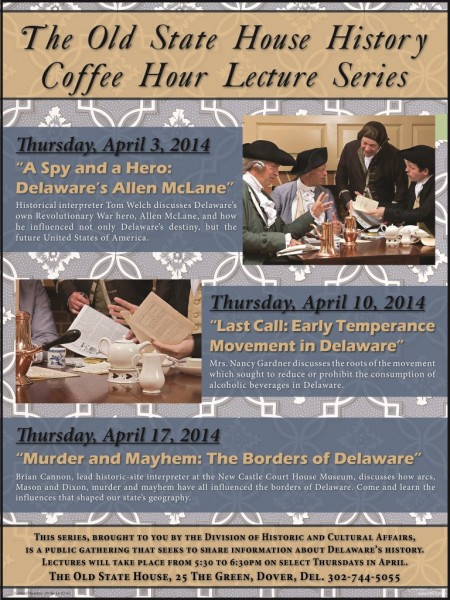 A complete listing of Old State House History Coffee-Hour Lecture Series programs follows. Additional lectures will be scheduled based on public interest in the series. All programs are free and open to the public with complimentary coffee available for those in attendance. For additional information, call 302-744-5055.

Thursday, April 3, 2014
“A Spy and a Hero: Delaware’s Allen McLane.” Lecture by historic-site interpreter Tom Welch on Allen McLane of Smyrna, Del., a hero of the American Revolution, speaker of the state House of Representatives and delegate at Delaware’s Constitution Ratification Convention.

Thursday, April 10, 2014
“Last Call: The Early Temperance Movement in Delaware.” Lecture by Nancy Gardner on the movement which sought to reduce or prohibit the consumption of alcoholic beverages.

Thursday, April 17, 2014
“Murder and Mayhem: The Borders of Delaware.” Lecture by Brian Cannon, lead historic-site interpreter at the New Castle Court House Museum, on Delaware’s unique arched boundary and the factors that created a lawless environment near the state’s ambiguous borders with Pennsylvania and Maryland.