On Sept. 4, 2013, Boela Gerber, winemaker for Groot Constantia, the oldest surviving wine estate in South Africa, visited Lewes’ Zwaanendael Museum to explore the 18th-century connection between the winery and the state of Delaware. That connection was first discovered in 2004 when a bottle fragment bearing the embossed words “Constantia Wyn” was found on Lewes Beach. Bottles embossed with the Constantia Wyn emblem were used in the period 1760 to 1840 and originated from the farm now known as Groot Constantia.

As a result of archaeological investigations led by the Delaware Division of Historical and Cultural Affairs, the bottle fragment was traced to the Roosevelt Inlet Shipwreck, thought to be the remains of a British merchant ship loaded with cargo inbound for Philadelphia, which ran aground and became stranded in the shallows off Lewes’ Roosevelt Inlet sometime between 1772 and 1800. Artifacts from the wreck began turning up on Lewes Beach in 2004 as a result of a replenishment project that pumped sand from the floor of the Delaware Bay onto the beach.

An underwater archaeological investigation located the shipwreck site in 2005, while a second investigation, conducted in 2006, recovered a wide range of artifacts representing the ship’s cargo. Items recovered during these investigations are part of the cultural legacy of the state of Delaware and are being curated by the Division of Historical and Cultural Affairs. A small sampling of artifacts from the shipwreck is currently on display at the Zwaanendael Museum.

In 2005, in commemoration of the 320th anniversary of the founding of the estate, Groot Constantia introduced Grand Constance, a commemorative dessert-wine similar in style to the wine that made the estate famous in the 18th century, and similar to the wine that was part of the Roosevelt Inlet Shipwreck’s cargo. Packaging of Grand Constance includes a bottle-design in use in the late 18th century, embossed with a replica of the Constantia Wyn emblem that was found in the Roosevelt Inlet Shipwreck. The wine, which is individually packed in a wooden box, includes an information sheet that covers the Delaware story. 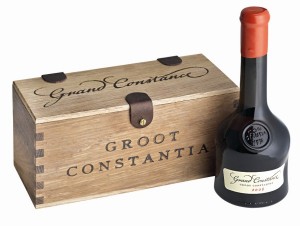 International acclaim for this historic and distinctive wine was immediate and long-lasting. In 2013, Grand Constance was awarded gold medals at two prestigious wine competitions—the Monde Selection in Brussels and the International Wine Challenge in London. Following up on this recognition, Gerber visited the United States in the spring and summer of 2013 in order to help promote Groot Constantia’s wines to American consumers. During his visit to the Zwaanendael Museum, in which he was accompanied by Ben King of DOPS, Inc. which distributes Grand Constantia in Delaware, Gerber was treated to a tour led by historic-site interpreters Kay Powell and Sharyn Murray. As part of the tour, Gerber was shown several bottle fragments embossed with Constantia Wyn that had been specifically brought out of the division’s archaeological collections for his visit.

For information on where Grand Constance can be purchased in Delaware, contact DOPS, Inc. at 301-839-8650.