Have you been on The Green in Dover lately? The east side has mounds of dirt, equipment running around, and a lot of construction going on. It looks like a mess now, but the Division’s project will soon improve the sidewalks and landscaping in front of the Old State House and the Supreme Court Building. There will also be a new sidewalk linking the historic Green with the Legislative Green. Because this is in the oldest part of Dover, archaeologists from John Milner Associates (JMA), under contract for this project, tested some areas and designated other areas for monitoring to see what turns up during construction.

Recently, the contractors hit an old brick wall in front of the Supreme Court Building, immediately stopped, and called HCA. We went over to take a look and a JMA archaeologist came down from their headquarters in West Chester, PA, to excavate and record the find. This was a small section of the north basement wall and another piece of a wing built on the north side of the old Chew House, which was demolished about 1910 to make way for the new Supreme Court Building (completed 1912). ”Well, that settles that,” we thought. 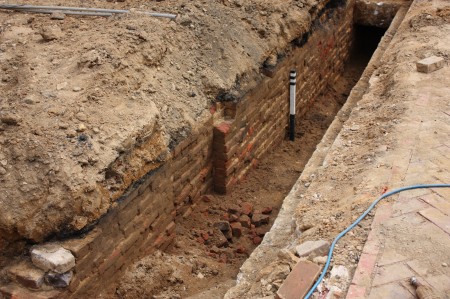 However, as the contractors dug out the area for a footing for the Court Building’s new handicapped access ramp, an original sewer line was discovered. This terra cotta (ceramic) pipe cracked in several places and created a small crisis – it was still in use! The architect and the contractors decided to replace the sewer line completely, tying it into a modern sewer line just off the street near the John Bell House. Tracing the line, the contractors hit the front wall of the Chew House, and called the Division again. 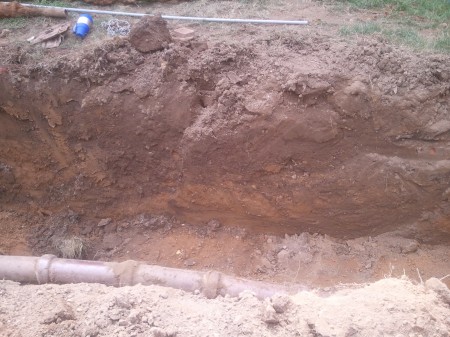 We realized that the Supreme Court builders just filled in part of the basement of the Chew House and left large parts of the wall in place. Because there were no archaeological layers remaining with the wall, we decided to monitor and record the discovery ourselves. Eventually, most of the front wall of the building was found.

We also monitored the trench along the sewer line. This area was already disturbed by the 1912 sewer line. The construction workers found some modern metal artifacts, but also a number of 18th-century artifacts. These included part of a porcelain tea bowl foot, a lead-glass baluster stem from a wine glass, and a small fragment from a wine bottle. These artifacts may very well relate to the Chew House. 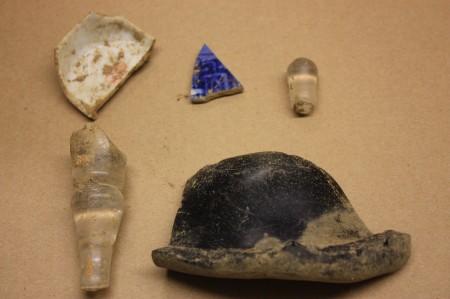 The side wall of the new sewer trench showed us that an 18th– to early 19th-century layer of soil is still in place in the southeast corner of The Green, under about 12-15” of modern fill. Archaeologists from JMA are coming back soon to test this area more extensively, once the contractors remove the top foot of soil mechanically. This will save a lot of time, and allow the archaeologists to concentrate on the early layers. We hope this work will give us a better glimpse into the 18th-century Green.

The Chew House was built by Samuel Chew, colonial Delaware’s first Chief Justice. Does anyone know what other notable Delawarean lived there?