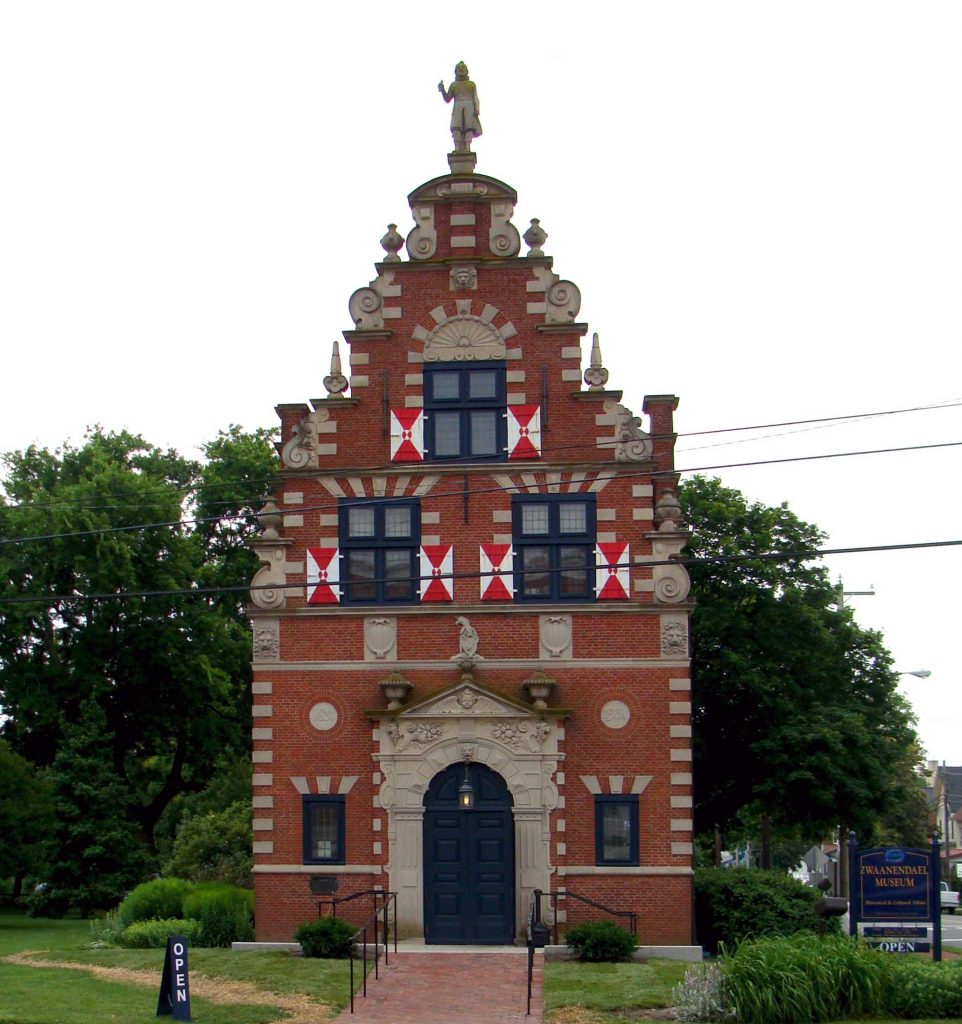 The Zwaanendael Museum is a showcase for Lewes-area maritime, military, and social history. Modeled after the town hall in Hoorn, the Netherlands, the museum commemorates the founding of Delaware’s first European settlement by the Dutch in 1631.

The following text is taken from the interpretive panel of the de Vries Monument located on Pilottown Road in Lewes, Delaware. The De Vries Monument was dedicated on September 22, 1909, and placed in the National Register of Historic Places on February 23, 1972. It commemorates the establishment of the first permanent European presence on the Delaware Bay

In 1631, a group of settlers under David Pietersz de Vries landed near this spot to form a whale hunting station and agricultural settlement. The settlers of Swanendael, meaning “Valley of the Swans,” crossed the Atlantic in the Walvis. A report to de Vries confirmed that the settlers had been killed and the buildings destroyed as a result of a cultural misunderstanding between the Dutch and Native people in the area.

The inhabitants of the land previous to the Dutch arrival were of an Algonquian group called the Cinconicins, written in early records as Sickoneyns, Sikonessink, Siconesius and Siconese, or Great Siconese. It is likely that the Great Siconese lived by hunting and the intensive gathering of a wide variety of natural resources. The resources would have been seasonally available in the forests, in numerous streams and along the coast. Our knowledge of these Native people comes from information recovered through the scientific investigation of archaeological sites in the Lewes area, and from information obtained in historical records dating from the colonial period.

In 1609, Henry Hudson sailed into the Delaware Bay in search for a Northwest Passage to China. His voyages contributed to the establishment of European colonies in North America.One of these, called New Netherland, was established by the Dutch. New Netherland included present day New York, New Jersey, and Delaware. The Delaware River, known as the South River in the seventeenth century, formed the southern boundary of New Netherland.

In 1629, Gillis Hossitt and Jacob Jansz, agents of the Dutch West India Company, traveled to the Delaware area to ‘purchase’ land from the Native Americans. The concept of land ownership was foreign to the Native Americans, who were more familiar with the concept of gifting. A tract of land, eight Dutch miles long and half a Dutch mile in width, was acquired by the Dutch in exchange for cloth, axes, adzes, beads, and various other goods. A patent was registered and confirmed in 1630.

In Amsterdam, Samuel Godyn gained the rights to settle the new territory and arranged for “patroons” to invest in the project. David Pietersz de Vries was given general administration of the colony from Holland. Captain Peter Heyes was to command the Walvis, and company agent Gillis Hossitt was to be in direct charge of administering the settlement on site. The purpose of the settlement was “to carry out the whale fishery in that region, and to pant a colony for the cultivation of all sorts of grain, for wich the country is very well suited, and of tobacco.” (Journal of de Vries).

On December 12th, 1630, the Walvis departed Holland with twenty-eight men and supplies to build a colony. After dropping off some supplies and passengers in the West Indies, the Walvis reached Blommaert’s Kill, later named Hoerenkil (modern day Lewes Creek). The settlers constructed a palisade, dormitory, and cook house. In September, Peter Heyes departed for Amsterdam in the Walvis, leaving Hossitt to run the colony.

In 1632, de Vries prepared to set sail with two vessels bearing additional settlers and supplies for the settlement. Before they departed, however, news relating to the destruction of the colony by local Native Americans postponed the trip. Sailing on May 24th with the Walvis (whale) and the Teencoorntgen (little squirrel) with fifty men, de Vries came upon the burned settlement on December 5th, 1632.

After asking a local Native American what had happened, de Vries wrote the following in his journal: “He then shoed us the place where our people had set up a column, to which was fastened a piece of tin, whereupon the arms of Holland were painted. One of their chiefs took this off for the purpose of making tobacco pipes, not knowing that he was doing amiss. Those in command at the house made such an ado about it, that the Indians, not knowing how it was, went away and slew the chief who had done it, and brought a token of the dead to the house to those in command, who told them that they wished they had not done it, that they should have brought him to them, as they wished to have forbidden him to do the like again. They then went away, and the friends of the murdered chief incited their friends…to set about the work of vengeance.”

According to de Vries, the Native Americans came upon the settlement as the colonists were working outside the walls and “struck them down.”

Although the colony lasted barely a year, the claiming of the territory fostered Dutch resettlement of the lower Delaware Valley. In 1655, after approximately twenty-four years, they would intensify settlement efforts. The South River, including the Lewes area, became a flourishing Dutch colonial area. The settlement at Lewes also included a Mennonite colony under Pieter Cornelisen Plockhoy by 1663.

As a result of political, economic, and military rivalries, in 1664 the English seized the Dutch holdings in New Netherland. Many Dutch settlers, however, remained and contributed to the political, social and economic development of the new English colony.

To learn more about the voyages of de Vries, read Narratives of Early Pennsylvania, West New Jersey and Delaware 1630-1707