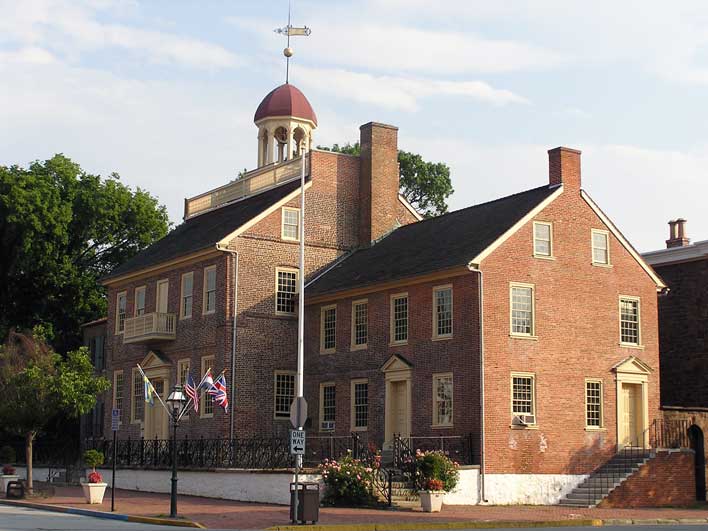 The New Castle Court House, located in the heart of the historic City of New Castle, Delaware, is one of the oldest surviving courthouses in the United States and a registered National Historic Landmark. The original 1732 court is built over the remains of the 1680s courthouse, with additions and modifications throughout the 18th and 19th centuries. All jurisdictions of Delaware’s courts, and including the federal courts, have met in this building. The state courts removed to the City of Wilmington in 1881 with the changing of the county seat, but occasional court sessions and proceedings are still held here.

The New Castle Court House is also Delaware’s first capital building and meeting place for the colonial and first state Assembly. On June 15, 1776, the legislature passed a resolution to separate from Pennsylvania and Great Britain, creating the Delaware State.

Two months later, September 20, 1776, the first constitution for the Delaware State was adopted. In 1777, the capital moved to Dover. 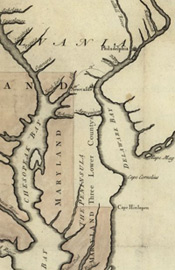 The land that would become known as Delaware was governed by the Dutch, Swedes and English from 1631 until it was given to William Penn in 1682. Penn needed the land along the lower Delaware River to give his colony of Pennsylvania access to the Atlantic Ocean. Called the Three Lower Counties by Penn, they were governed, along with Pennsylvania, under charters from King Charles II and his brother James, the Duke of York.

In 1701, after years of dissatisfaction under Penn’s rule, the residents of the Three Lower Counties petitioned for their right to have a separate government, which was granted in 1704, with the provision that Penn, or his successors, would continue serving as governor of both regions. Over time the connection between Pennsylvania and the Three Lower Counties became weaker and weaker.

By 1774, as problems increased between England and her American Colonies, the various Colonial governments, including that of the Three Lower Counties, began to communicate more closely with each other. In September 1774, after England closed the port of Boston, the First Continental Congress, composed of representatives from all the Colonies, was called to try to find ways to work with the king, but increasingly found little to no cooperation.

On May 15, 1776, the Second Continental Congress, meeting in Philadelphia, anticipated the possibility of a break with England and advised each of the 13 Colonies to have a government in place, ready to run their affairs should it become necessary. On June 15, the Assembly of the Three Lower Counties meeting in the Assembly Room in the New Castle Court House, acted on the advice of Congress, approving a Separation Resolution. Under this document, anyone holding office, military or civilian, in the colony would thereafter be doing so in the name of the government of the Counties of New Castle, Kent and Sussex Upon Delaware, and not the King of England. This cut all ties that Delaware had with the British crown, and since the three counties had originally been part of Pennsylvania by royal charter, it also cut the few remaining ties that Delaware had with that government.

Separation Day celebrations are now held annually in New Castle on the second Saturday in June.

Delaware’s most prominent abolitionist and stationmaster on Delaware’s Underground Railroad, Thomas Garrett, assisted in aiding a runaway slave family to escape from New Castle to Pennsylvania. He and fellow abolitionist, John Hunn, stood trial in 1848 before the federal court seated at the New Castle Court Houseon charges violating the Fugitive Slave Act of 1793. The trial was presided over by United States Supreme Court Chief Justice Roger B. Taney.

Garrett and Hunn were found guilty and fined thousands of dollars, losing homes, businesses, and personal property. But, in the court room, Garrett defiantly proclaimed that he would continue with his efforts in helping those oppressed by slavery regardless of the cost.