Five Stories: The People and Families of the Plantation 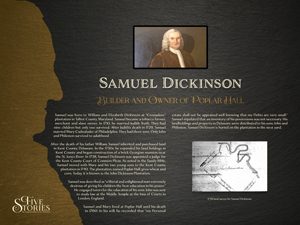 “Five Stories” explores the lives of a wide variety of people who lived in the late-18th- to early-19th-centuries on the plantation of John Dickinson, one of the founding fathers of the United States, signer of the U.S. Constitution and “Penman of the Revolution.” Panels tell the stories of John Dickinson’s father Samuel; Dinah, an enslaved woman owned by Samuel Dickinson who was later manumitted by John Dickinson; Mary Norris Dickinson, wife of John Dickinson; William and Deborah White, tenant farmers at the John Dickinson Plantation; and John Furbee and his brother Peter Patten, free-Black men who rented farmland from Dickinson. 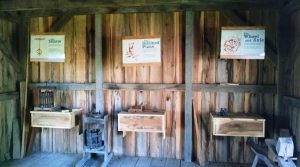 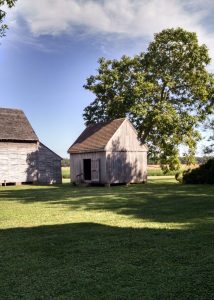 Display focuses on the six simple machines (inclined plane, screw, wedge, pulley, lever, and wheel and axle) that constitute the elementary building blocks of which many more-complicated machines are composed. Each of these machines was in common usage at the plantation during the lifetime of John Dickinson (1732–1808), one of the founding fathers of the United States, signer of the Constitution and “Penman of the Revolution.”

The Dickinson Plantation participates in the Old Dover Days celebration on the first Saturday of every May.