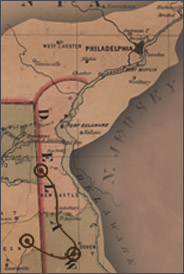 On Friday, December 5, 1845, Emeline and her family arrived at the farm of Quaker abolitionist John Hunn. The Hunn family immediately gave the weary group food, clothing, and shelter. Emeline and her family hid in the house and barn until the weather cleared and they could continue their journey. Neighbors who noticed the unfamiliar group at the Hunn farm alerted the local authorities to the possibility of runaway slaves being harbored there. The Middletown constable, agents of the slave owner’s and neighbors traveled to the Hunn farm and confronted John Hunn with a runaway slave advertisement describing Emeline and the children.

Sam Hawkins, hoping to lure the group away from his family, ran from the barn. As the group chased Sam, the others ran into the woods in an attempt to escape. Emeline and her children soon found themselves lost and had no choice but to circle back to the Hunn farm.

Sam was caught and taken to the magistrate in Middletown. He was given the choice of surrendering his elder sons to the slave owner’s agent in return for Emeline and the younger children’s freedom. Sam reluctantly agreed to the agent’s proposal, but later the entire family was arrested, chained and taken to the jail in New Castle, Delaware.