-BACK BY POPULAR DEMAND!-

After a standing-room-only performance on April 21, 2018, the Zwaanendael Museum, located at 102 Kings Highway in Lewes, Del., will reprise its production of “Mysteries at the Museum: ‘Blood Diamond: The Murder of Ebe Lynch.’ ” Created by Zwaanendael Museum staff, this theatrical murder-mystery will be presented outdoors on the museum’s grounds on Saturday, July 14, 2018 at 2 p.m. Guests should bring lawn chairs. The rain date for the performance is Friday, July 20 at 2 p.m. Admission is free but, due to space restrictions, reservations are required by calling 302-645-1148 no later than July 13, 2018. 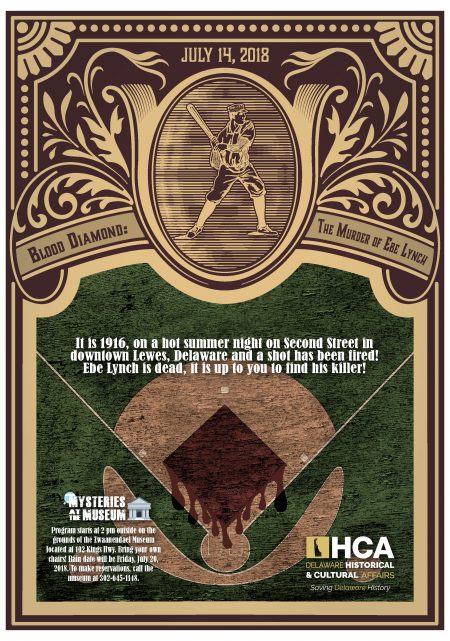 “Blood Diamond: The Murder of Ebe Lynch” is based on an actual incident that took place on a hot summer night in 1916 on Second Street in Lewes. During that incident, shots were fired and Ebe Lynch, a prominent local postmaster and president of the Lewes baseball team, was found dead. As part of the play, museum visitors will serve as detectives, meeting suspects and evaluating clues to determine who committed this heinous crime. Guests of all ages will enjoy participating in this historical whodunit.