During service in World War I, the American destroyer USS Jacob Jones was torpedoed and sunk off the Scilly Islands, England on Dec. 6, 1917. Out of the 110 men who were aboard the ship that day, 64 lost their lives. The Jacob Jones was the first U.S. destroyer ever to be lost to enemy action. This year marks the 100th anniversary of its sinking. 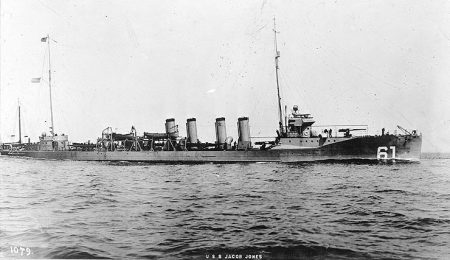 The ship was named in honor of Commodore Jacob Jones (1768–1850) of Smyrna, Del., an American hero of the War of 1812. In 1814, the Delaware legislature commissioned the English-born, American artist Thomas Sully (1783–1872) to paint portraits of Jones and another Delaware hero of the War of 1812, Commodore Thomas Macdonough, for display in the House of Representatives chamber of The Old State House. The paintings still hang in that location.