When I began my internship with the Delaware Division of Historical and Cultural Affairs, I was not quite sure what to expect. Certainly, I knew that I would be handling objects, but I was not prepared for the intimate journey I was about to embark on through personal research. I walked into collections storage and was told to choose an object to work on—anything in the room was fair game. I chose a small box and discovered it was an archive collection. It didn’t appear that it would take me very long, so it was the ideal beginning to practice my newly acquired knowledge of object handling and condition reporting. The archive collection turned out to be much more than I expected and 38 objects later, I believe that I have a good grasp on understanding the objects, but more importantly, the people who possessed them. The newly acquired donation is aptly named the Peets Family Archive Collection. The collection has become near and dear to my heart. It inspired me on a personal level, particularly through the life and love of Ethel Canby Peets.

Ethel Poyntell Canby was an artist from an affluent family in Wilmington, Del. She was born on May 16, 1877 and was the seventh of eight children. Ethel eventually established herself as a respected artist in Delaware. She loved to paint still lifes of fruit and flowers, as well as portraits and landscapes. When Ethel was 35 she travelled to Paris, France, where she lived and studied as an American art student from 1912 to 1913. While in Paris, Ethel kept a detailed diary of her experiences. She wrote of Mardi Gras in Paris and painting roses. Ethel also wrote of an encounter that would change her life forever—when she met her future husband, Orville Houghton Peets: 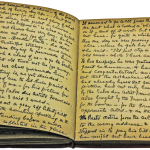 The “man who happens in” is also an artist. I have not known him very long … he has a studio not very far off … he is an American.

Orville Peets … he does the most beautiful etchings … and some of us are trying to persuade him to teach a class of us … and go to Seulis, a quaint old tavern not too far away. I think we shall persuade him … though nothing is, as yet decided.

He asked me to let him paint a portrait of me … for his picture for the spring Palm des Artistes Francais. So of course I said I would. … We picked out a gray soft liberty silk dress … with something sparkling on it and I am standing before a mirror my face reflected in the glass. It seemed to go well from the start.

Orville’s portrait of Ethel went on to win an honorable mention in the Paris Salon and was bought by the French government for the Luxembourg collection.

The couple got along quite nicely and continued to spend time together when Orville decided to teach the group called the American Art Students Club of which Ethel was a member. Ethel eventually went back to America in 1913 and the couple married on Sept. 23, 1914. Orville was 30, while Ethel was 37, an uncommon occurrence in the early 1900s. The couple spent a few years together as newlyweds, but then the U.S. entered World War I on April 6, 1917. Orville went to fight in France while Ethel worked as an artist at the Woodstock Art Colony in Woodstock, N.Y.

Despite their separation, the couple tried to keep in touch over the next few years. Orville sent Ethel a military booklet that the French troops had given American troops to show their appreciation. He left the small message: “O.H. Peets to E.P.P (Ethel Poyntell Peets) Paris—1918.” Ethel had the endearing habit of getting her picture taken professionally and sending little handwritten notes with the photographs. One such note read “Orville—dear love—and every spot a kiss and have a Happy Christmas and think of me—write to me. I love you.”

It is obvious that the couple worked hard to maintain their connection and love, regardless of the Atlantic Ocean separating them. Shortly after Orville rejoined her, he received a commission from the Hispanic Society of America that took him abroad to Portugal and Spain for another three years. During that time he painted and etched many pieces displaying the culture and beauty of the two countries. Ethel remained at the art colony. However, the couple eventually reunited in Delaware and settled on Herring Creek near Lewes where they remained the rest of their lives. Ethel and Orville never had children.

The couple was very active in the Delaware artists’ scene. They were members of Howard Pyle’s circle of artists as well as belonging to the Wilmington Society of Fine Arts and the Rehoboth Art League. Ethel died in 1955 and Orville outlived his wife by 13 years until his death in 1968. Their legacy exists today because they left all of their worldly possessions, including their home, to their long-time friends Skipper and Til Purnell who donated the personal items to the state’s collections.

As you may surmise, the objects of the Peets Family Archive Collection allowed me to unveil the personal life and love of Ethel Canby Peets. More often than not, it is Ethel’s husband Orville who receives the recognition as a Delaware artist. However, Ethel was an astounding woman and an artist in her own right. I believe the collection is wonderful because it allows the researcher to imagine the life of a woman who studied and fell in love in Paris, over a hundred years ago. Ethel’s strength and drive to become an established and recognized artist in what had been a man’s world inspires me, while her love affair with Orville appeals to the hopeless romantic in me. I hope that when you study the collection, you discover for yourself what inspired and delighted me.

Amanda Svehla is currently a senior at Wesley College and will graduate in May 2016 with a bachelor’s degree in history. From 2015 to 2016, she served as an intern in the Division of Historical and Cultural Affairs’ Collections Program.