From April 2, 2016 to Jan. 28, 2017, Lewes, Del.’s Zwaanendael Museum featured the exhibit “Wine and Spirits in Delaware: Producing, Preserving, and Presenting” which utilized graphics as well as historical objects from the collections of the State of Delaware to tell the story of Delaware’s wine and spirits trade from the time of European settlement to the present day. Historical items on display in the exhibit included bottles, jugs and flasks used as containers for wine, spirits and mixers; decanters, goblets and glasses used for serving these beverages; and accessories including a liquor chest, trays, trivets, corks, corkscrews and a bitters shaker. 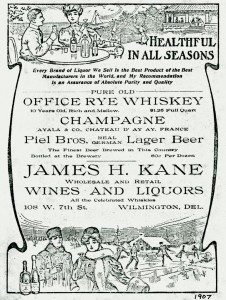 Research has produced no evidence of Delaware wine-making for commercial purposes until the 1993 opening of Nassau Valley Vineyards located near Lewes. The exhibit included information on that vineyard as well as other present-day Delaware wineries including Pizzadili Vineyard and Winery in Felton, Harvest Ridge Winery in Marydel and Fenwick Wine Cellars in Selbyville.