What are mission symbols? Learning about mission symbols painted on aircraft during World War II has proved to be somewhat difficult but interesting research. Mission symbols, also known as mission marks, kill markings and victory decals, are the small symbols painted on the sides of planes, usually near the cockpit or nose, which are used to show the successes of the crews that had flown that particular aircraft. During World War II, these marks or symbols appear not to have been official military markings but rather were given meaning through their repetitive use by the airmen. The markings may be varied in appearance and more than one marking may have similar meanings. Mission symbols were used by all of the Allied and Axis countries participating in the war.

The following chart includes examples of the types of symbols seen on the U.S. Army Air Force planes. Though initially seen on bombers, mission symbols later were also used on fighter aircraft. 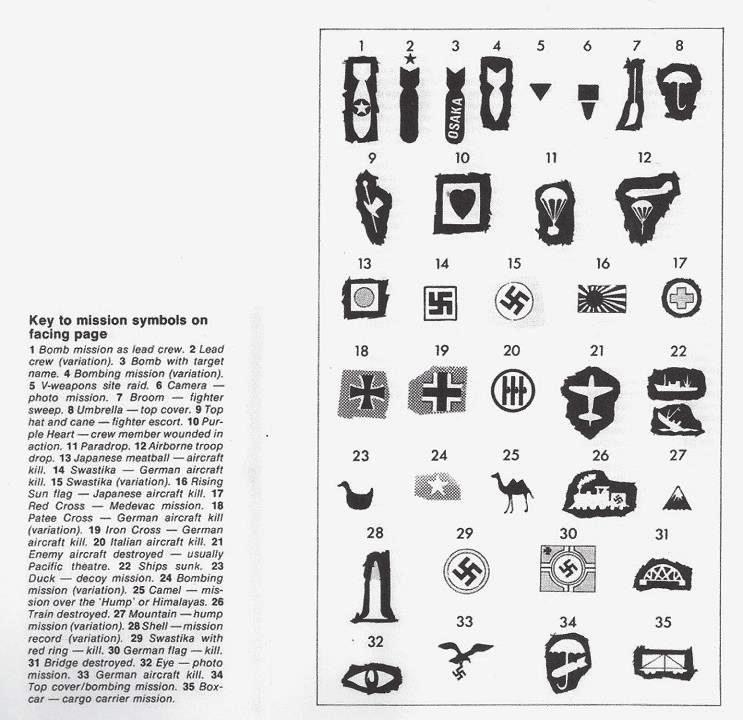 In my next blog, I will change gears and discuss selected activities of the American Red Cross during World War II.

The images in this blog were selected from the William D. Willis World War II Photographic Collection, one of the permanent collections preserved by the Division of Historical and Cultural Affairs. Mr. Willis of Dover, Del. served as a photographic technician with the Army Air Force during the Second World War. A display of items from the collection, “World War II Through the Lens of William D. Willis,” was on view at Legislative Hall in Dover from March 4, 2015 to Feb. 21, 2016.

On a Wing and a Prayer: The Use of Military Glider Aircraft in World War II—June 3, 2015

On a Wing and a Prayer: A Closer Look at Military Glider Aircraft Used in World War II—July 21, 2015