In a recognition ceremony held at the Delaware Public Archives building in Dover on Dec. 6, 2014, Secretary of State Jeffrey Bullock presented awards celebrating the work of 1,171 students from 26 schools across the state who took part in the 2014 Delaware Day Fourth Grade Competition. Over the past 13 years, more than 10,000 students have participated in the program. 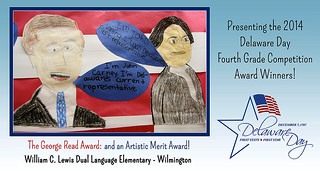 Sponsored annually by Delaware’s secretary of state, the Fourth Grade Competition encourages students to study the Constitution and to discover Delaware’s role in its writing and ratification. Students’ observations are presented in a four-panel display format that incorporates prose, poetry, artwork, songs and political cartoons. Each display is reviewed for factual accuracy, spelling and creativity.

Questions for this year’s competition required students to specifically study the Philadelphia Convention, Article I (the legislative branch), Article V (the amendment process) and Article VII (the ratification process). Since a congressional election was held in November 2014, students were also asked to compare and contrast today’s direct election of senators with the process originally established in the Constitution by which senators were elected by state legislatures. Understanding today’s election process required students to study the 17th Amendment which was ratified by 36 states in 1913 and by Delaware in 2010. 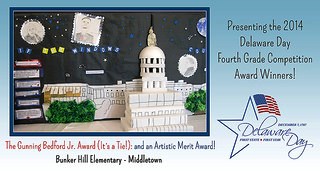 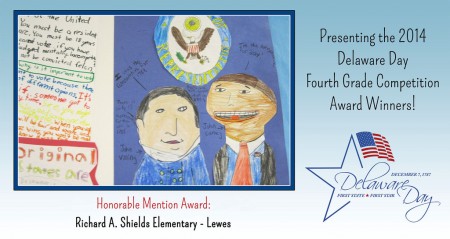 “Delaware Day is a great time to learn about the important history of our state,” said Secretary Bullock. “I was so impressed with the work of the fourth graders from across the state who contributed projects to the competition, and congratulate them on a job well done.”

The 2014 Delaware Day Student Competition was planned and organized by Division of Historical and Cultural Affairs’ historian and National Register coordinator Madeline Dunn in consultation with the state Department of Education. Participation by other division staff-members included service as judges of the student-developed projects, development of awards certificates and printed materials, set-up of the awards-program location and staffing at the event.

Go to the following for information about Delaware’s signers of the U.S. Constitution and a Survey of Historic Sites and Buildings associated with the signers.