When Cindy Small, executive director of Kent County Tourism, learned that Winterthur Museum would be mounting the exhibit “Costumes of Downton Abbey” during 2014, she realized that the time period depicted in the popular television show—1900 through the 1920s—was an era rich in American and Delaware history that could serve as the perfect organizing theme for the 81st Annual Dover Days Festival. 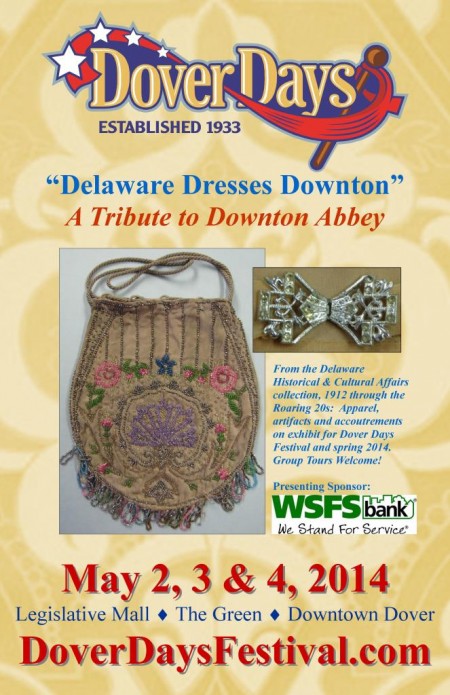 Produced by Kent County Tourism, the Dover Days Festival is an annual celebration of the First State’s capital city held on the first full weekend in May in Dover’s historic downtown district. This year’s festival will take place from May 2 to 4. Admission is free and open to the public.

Knowing that she was working within a highly compressed time frame, Small convened a group of Dover Days presenters in November 2013 to see if there was enough time for them to devise a unified series of programs on the history and fashion of the Downton-Abbey-era in America, and in particular, in Delaware. The group—which included representatives from the Delaware Division of Historical and Cultural Affairs, the Biggs Museum of American Art, the Dover Century Club, the Dover Public Library and the First State Heritage Park—responded enthusiastically, working intensively and collaboratively over the next few months to develop nearly 20 separate programs under the theme, “Delaware Dresses Downton.”

In creating its programming, Division of Historical and Cultural Affairs’ exhibits professionals searched the extensive collections of the state of Delaware for authentic early-20th-century apparel, accessories, art and artifacts. Based on their findings, they developed two displays that will be featured at this year’s festival: “Dress for Success: The Edwardian Gentlemen’s Wardrobe and Accessories”; and “Simple Pleasures: Picnic, Play and Dance” which features fashions that reflect the spirit of the liberated “modern” woman. Likewise, the division’s three downtown Dover museums—The First State Heritage Park Welcome Center and Galleries, The Old State House and the Johnson Victrola Museum—developed theme-specific programming on early jazz, Victor Talking Machines, the women’s suffrage movement in Delaware and prohibition.

In similar fashion, the other participating organizations developed their own thematic programming—the Biggs Museum created a history of costume and fashion tour and will be hosting the fashion program “The Way We Wore” and a historical interpreter portraying Negro League and baseball Hall of Famer William “Judy” Johnson; the Dover Century Club will be hosting the program “Close to the Vest and Under the Skirt Tour”; the Dover Public Library will be presenting a Downton Abbey book exhibit and a concert by the First State Harmonizers barbershop chorus; and the First State Heritage Park will be offering themed tours and rides in a 1910-era Stanley Steamer.

To crown the entire enterprise, Kent County Tourism and the Friends of Old Dover applied for, and were successful in receiving, a grant from the Delaware Humanities Forum to hire re-enactors from the American Historical Theatre in Philadelphia who will portray Americans from the Downton-Abbey-era including architect Frank Lloyd Wright; African-American millionaire Madam C.J. Walker; businessman John Wanamaker; and Peggy, maid of Theodore Roosevelt’s daughter Alice.

All told, this year’s Dover Days Festival is proving to be a model of collaboration between presenters, and a golden opportunity to satisfy people’s seemingly insatiable interest in a time period depicted so evocatively in the Downton Abbey television series and in Winterthur’s exhibit. It should prove to be a win-win for all involved.

Go to the following for a complete listing of 2014 Dover Days Festival activities.