“Wilmington: Preservation and Progress,” a new book published in 2013 by Delaware photographer Gene Castellano, is now available for purchase at the Delaware Division of Historical and Cultural Affairs’ online history store. 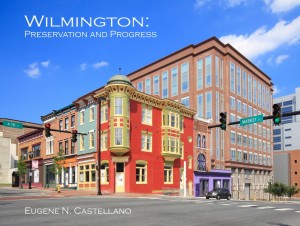 A “then and now” photographic history of the architecture of Wilmington, Del.’s business district between 1984 and today, the publication features black and white images from the past paired with color images of the present, accompanied by historical information about each of the featured locations. Several of the buildings showcased in the book were rehabilitated with assistance from Delaware’s Historic Preservation Tax Credit Program including the Central Brach YMCA, the Delaware Trust Building, the Queen Theater and the assemblage of buildings between 400 and 426 N. Market St. that is featured on the book’s cover.

Describing the time period covered in the publication, Castellano noted, “During the eighties, Wilmington was bursting with optimism and anxious to reinvent itself from a 19th century manufacturing city into a 20th century financial center. Armed with progressive new legislation designed to make Delaware more attractive to credit card banks, ranks of public officials, businessmen and developers eagerly sought to transform the city. Their efforts met many challenges and setbacks, but eventually, progress was achieved. Although many of the buildings from that era met the wrecking ball and were replaced with modern office towers, others survived with tasteful preservation.”