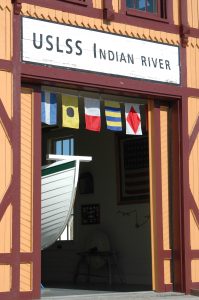 The Indian River Life-Saving Station is one of Delmarva’s relatively unknown gems. Situated along the coastline of southern Delaware between the Rehoboth Bay and the Atlantic Ocean, many recognize it as the hub for programs and events at Delaware Seashore State Park. This oddly-colored building, however, preserves a unique history that has slowly been forgotten over the years.

In the mid to late 19th century, devastating shipwrecks along American coastlines were an all too common occurrence. Shoals hidden just beneath the water’s surface caused vessels to run aground, losing cargo to the waves and drowning mariners within sight of dry land. By 1871, in response to public outcry, the government finally intervened.

Over the next few years, the first United States Life-Saving stations were built and manned by full-time crews known as “surfmen”. The men who joined the service left their comfortable lives at home to join a life where they would train by day and patrol the beaches by night, performing daring rescues in overwhelming conditions. The service was a complete success, lasting for 44 years until President Woodrow Wilson merged it with the Revenue Cutter Service to form the Coast Guard in 1915.

Built in in 1876, the Indian River Life-Saving Station protected mariners along the coastlines from as far south as Bethany Beach and as far north as Cape Henlopen. In total, the crew of this station responded to over 60 wrecks and saved the lives of 419 people.

Today, the Indian River Life-Saving Station is located along Route 1 just north of the Indian River Bridge and operates as the main public center for Delaware Seashore State Park. The museum itself is setup to resemble its 1905 appearance and is open to both public and private tours year-round.