As work has continued on The Green, we’ve had another unexpected discovery right outside our windows! Under the old sidewalk, the backhoe bucket hit a wall, which was subsequently uncovered, photographed, and mapped by HCA archaeologists. 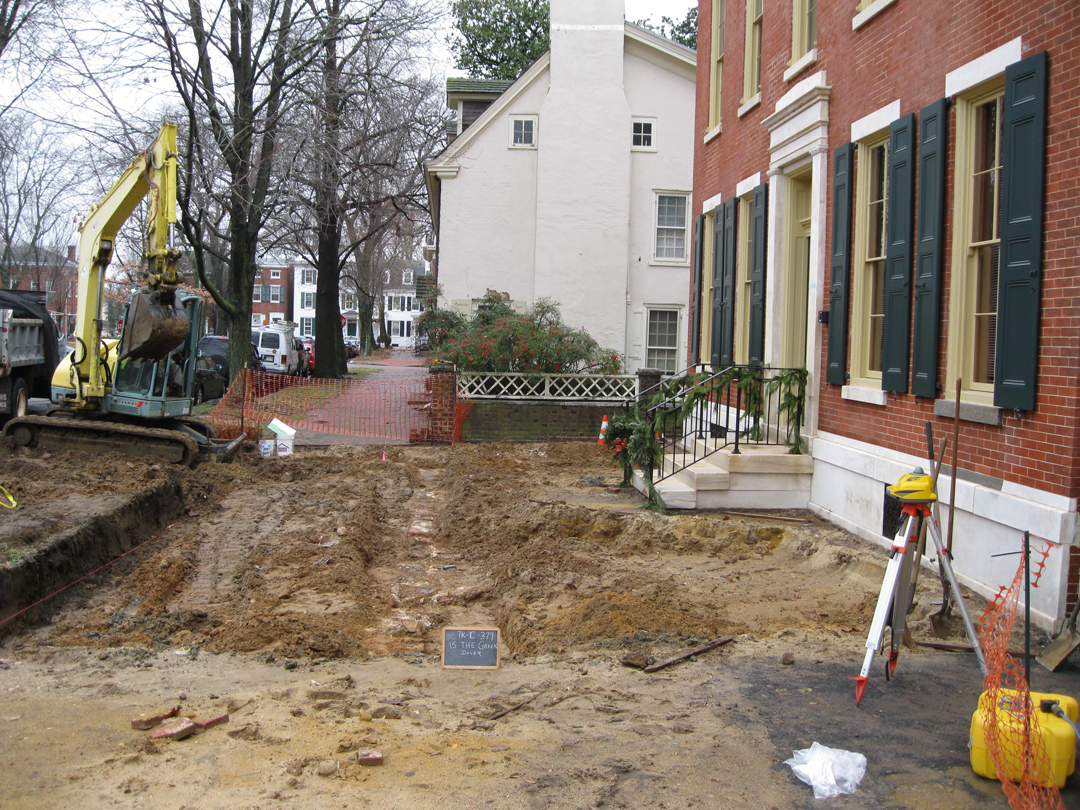 The wall was not very substantial, and included brick bats, a layer of roofing slates, and an area where the bricks were laid in soldier courses, with the narrow sides facing up instead of the broad sides. 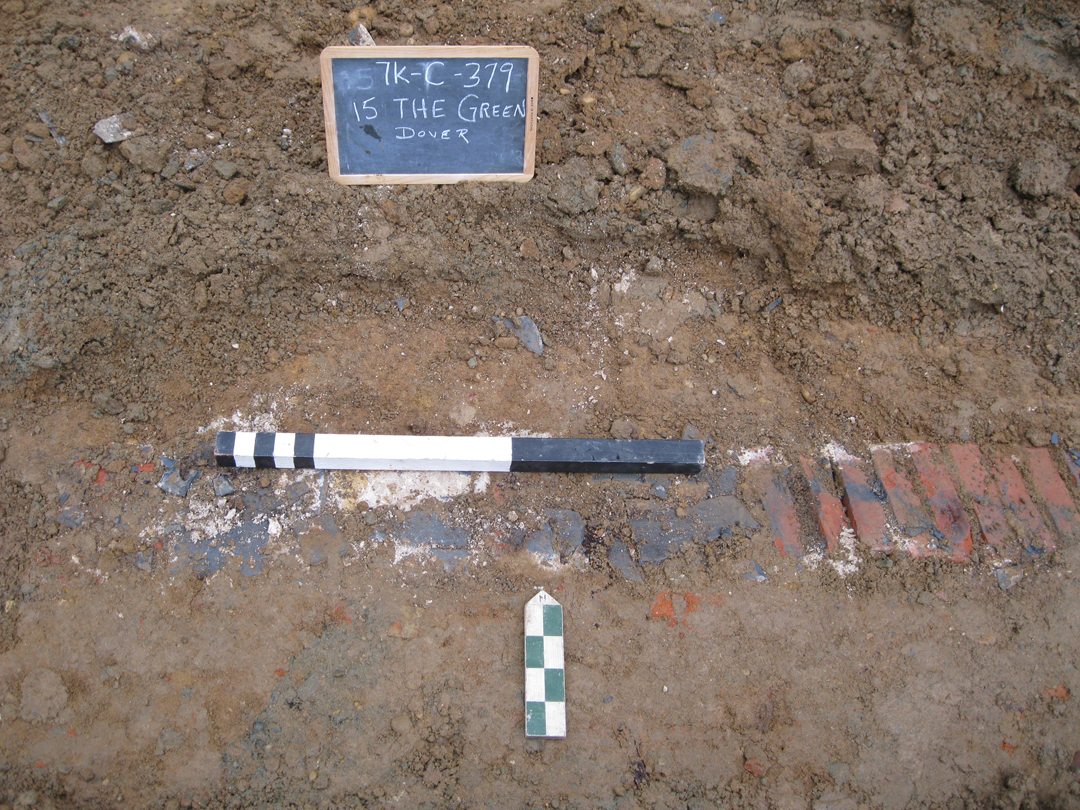 It started at the west corner of 15 The Green (Todd House), extended out about 15 feet, and then turned and paralleled the building, ending when it butted up against the extended vaults of 21 The Green. 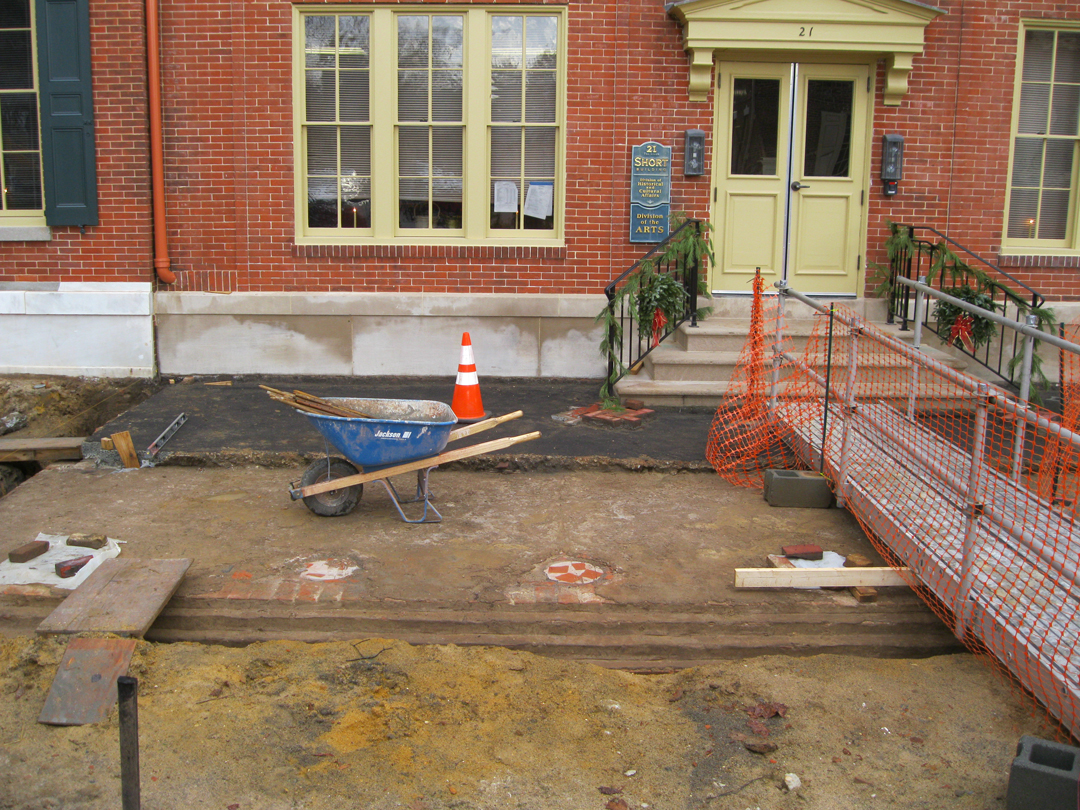 These vaults are also very interesting and this project provided our first glimpse at their construction from the outside. When 21 The Green was built, the basement’s storage area was made bigger by extending it beyond the front wall of the building. Next to the front wall are small rooms about eight feet wide, and opening into these rooms are a series of narrow vaulted rooms, extending another six to seven feet.

We’ve wondered about the purpose of these vaulted rooms, speculating that they were for coal storage for the original furnace. However, there’s no coal chute. 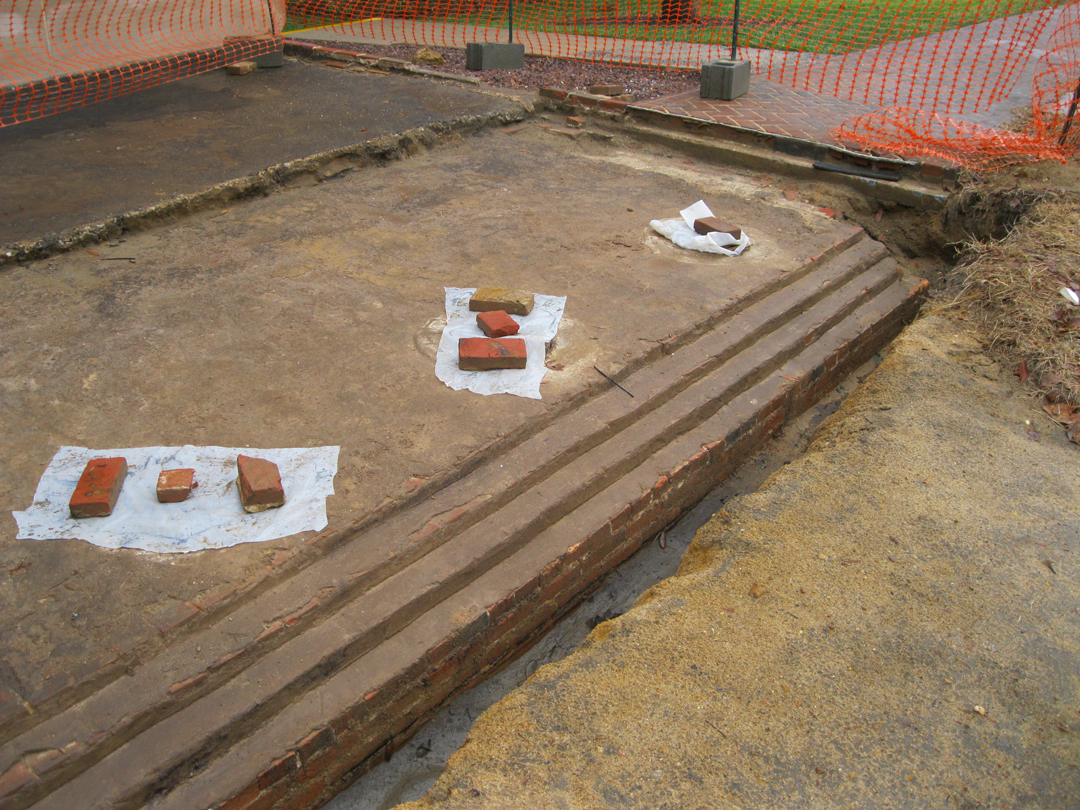 Once the exterior of the vaults was exposed, we realized that each vault had a circular opening in its roof at the south end. Some of these have been bricked and cemented over and some still have iron grills in place. Visiting our basement, we found that these openings let in light and air. So the vaulted rooms seem to have been for some kind of storage. 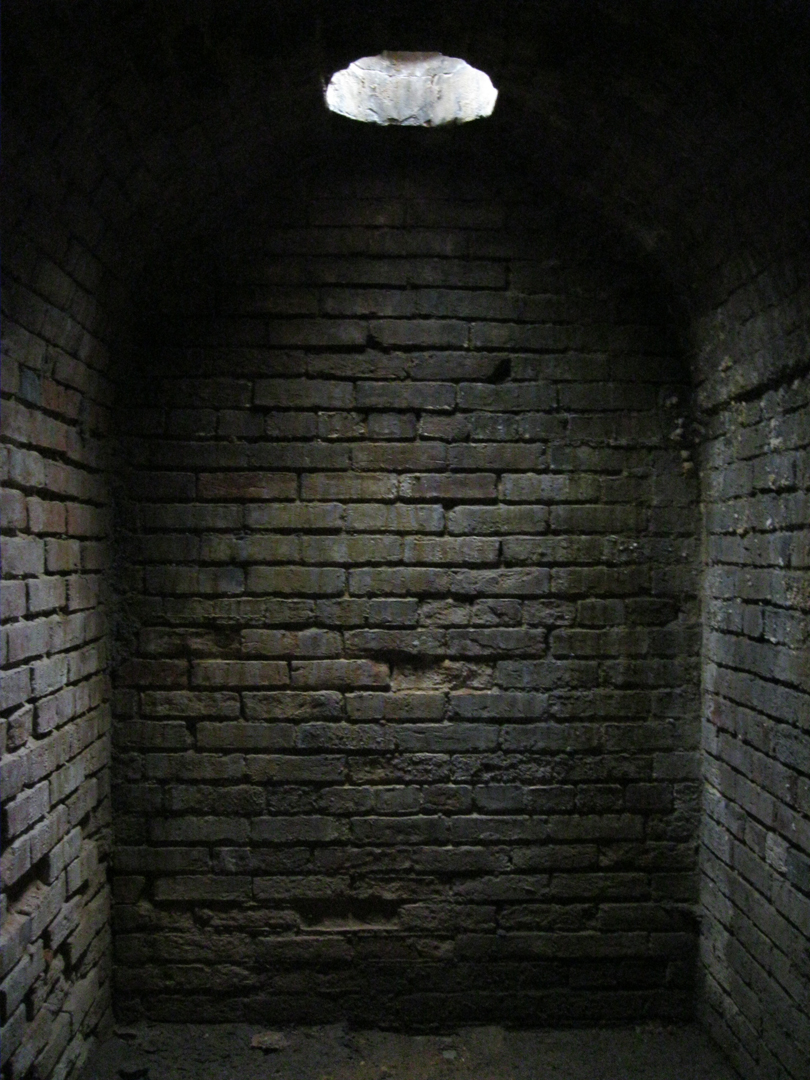 So what was the wall in front of 15 The Green for? It’s not sturdy enough for a building’s foundation wall. It butts up against both 15 and 21 The Green’s foundations, so it dates after their construction. We ruled out our first thought, that it may have been an earlier building, and decided it was probably some kind of terrace or veranda. One of our architectural historians went looking for evidence and found a historic photograph in our files that confirms that notion. 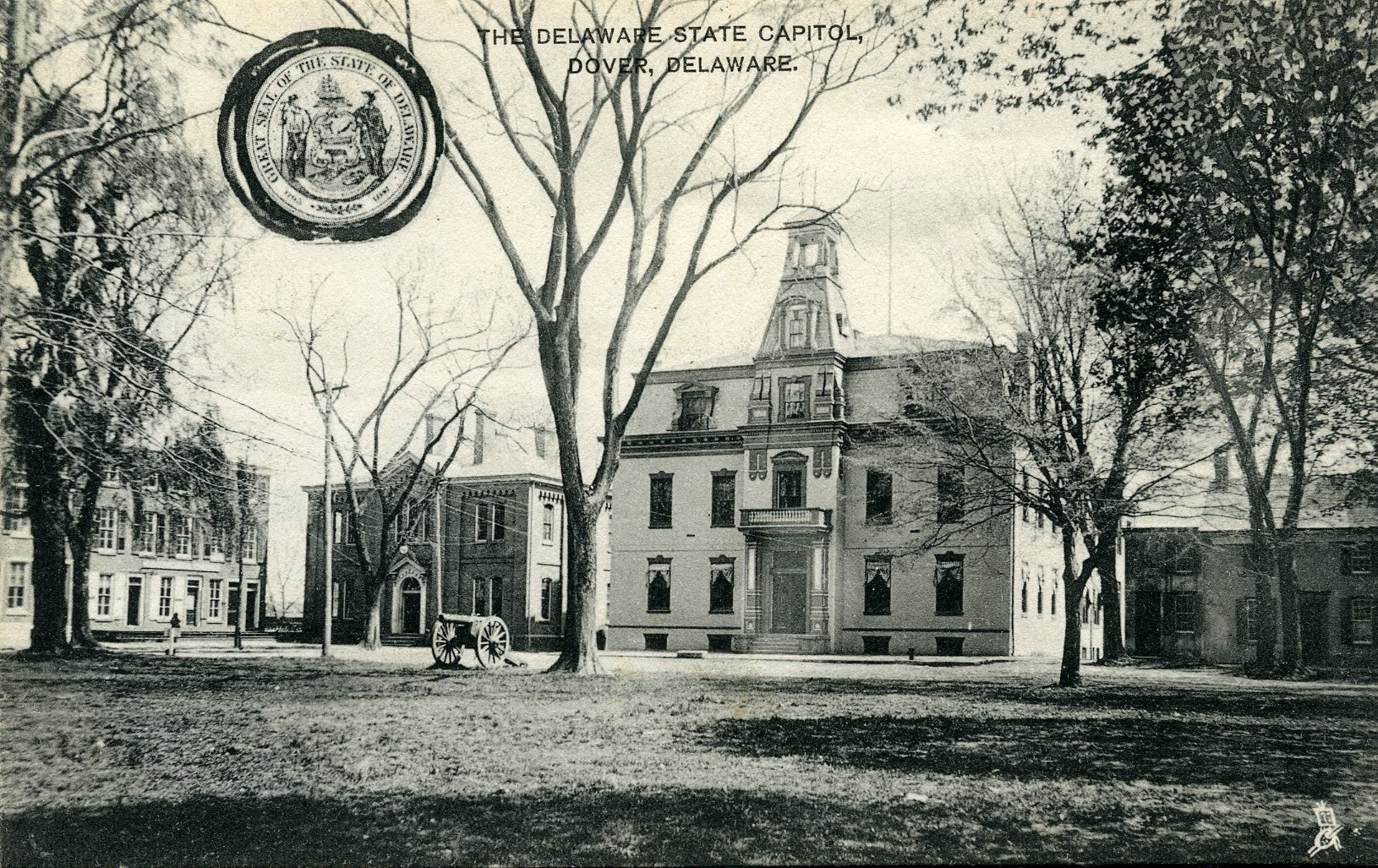 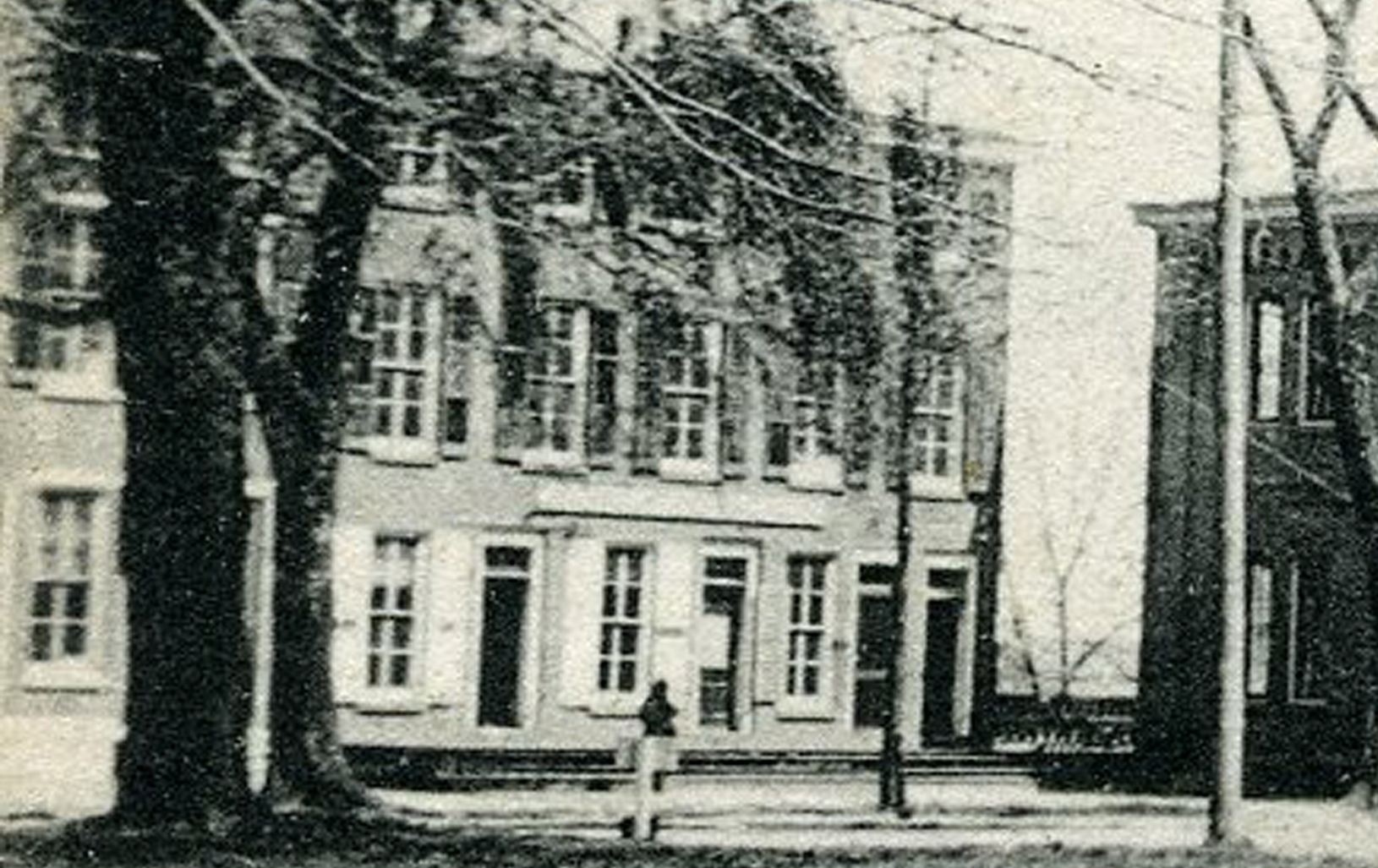 The photograph is focused on the State House, but off to the side, you can see that our buildings do not have separate stairs at the doors, and there appears to be a person walking in front of a high platform. So, when 21 The Green was built, they installed a veranda that came just below the door sills. This protected the basement vaults and extended across 15 The Green to match, on that less-than-perfect footer, since it was the owner of 15 The Green, Henry Todd, who built 21 The Green as a commercial venture. It must have had a slatted wooden platform, since, otherwise, light wouldn’t reach the vaults.