On June 30th of last year, members of the Delaware General Assembly joined Governor Jack Markell and guests from across the country to pass Senate Joint Resolution #7 at the Old State House in Dover. Sponsored by Sens. Brian Bushweller and Bruce Ennis along with Reps. William Carson and Darryl Scott, the resolution honors the memory and accomplishments of Major Allen McLane of Smyrna, a hero of the American Revolution. 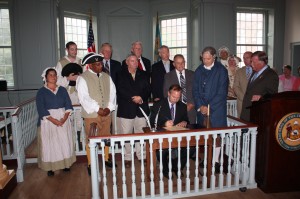 Why such a fuss more than two centuries later, though? Haven’t all of the memories, accomplishments, and heroes of the American Revolution been sufficiently honored by now?!

Well… what do you know about Allen McLane? 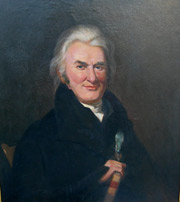 Odds are his name doesn’t ring as many bells as Caesar Rodney or Gunning Bedford, but his legacy merits a comparable resonance among the company of Delaware’s most celebrated patriots. SJR#7 was a significant step, but this will be the first in a series of postings to further explore the life and exploits of Allen McLane through topics like McLane’s:

While Governor Markell shares credit for passing Senate Joint Resolution #7 with its above-mentioned sponsors from the General Assembly, McLane would have likely remained a long-forgotten hero without the passionate work of Tom Welch, who will serve as the “man behind the curtain” for the series of blog posts to follow. 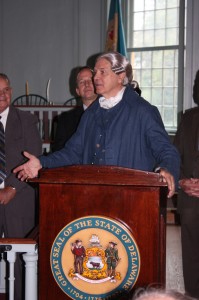 Mr. Welch has worked with the Delaware Division of Historical and Cultural Affairs as a historical interpreter since 2007. Prior to joining HCA, he spent 27 years as a celebrated administrator with Wesley College in Dover.

In 2008, Tom was asked to portray McLane in a special Delaware Day living history program. Upon researching his character, he was surprised to find how much McLane had accomplished and how little was popularly known about him.  Mr. Welch has devoted the years since to learning as much as he can about McLane and showing visitors to Delaware’s state capital what all the “fuss” is about with Allen McLane.

Since the passing of SJR#7, Welch has taken his living history portrayal on the road. This blog series offers yet another avenue for him to share his great research with the world in helping us all to recognize one of Delaware’s and America’s revolutionary heroes.

So the question still stands… What do you know about Allen McLane??