The practice of maintaining a green open space in the middle of a village or more populated environment began hundreds of years ago in England. The green was an open area of land within a settlement where the citizens could go for exercise, to graze livestock in a secure area, where markets were held, where justice was dispensed or where village services were located.

Today the New Castle Green provides both residents and visitors with an important sense of open space, in a heavily populated area. Division of Historical and Cultural Affairs maintains the trees on The Green and has done so since 1967. In 1989 the New Castle Advisory Committee was established to provide additional opportunities for community involvement regarding landscape issues affecting The Green. In 2000 an Urban Forestry Plan was adopted for this “urban forest.” The plan details the guidelines used when making decisions regarding this landscape.

The Green functioned as the center of the town’s business and governmental district. New Castle served as Delaware’s capital until 1777 as well as a county seat until 1881. Listed on the National Register of Historic Places in 1973, the Green features several significant buildings including the 1732 Court House, the 1799 New Castle Academy, an arsenal constructed by the federal government in 1809, and the Sheriff’s House erected in 1857. A large county prison originally occupied a major part of the Green until 1911 when the stone prison was demolished. 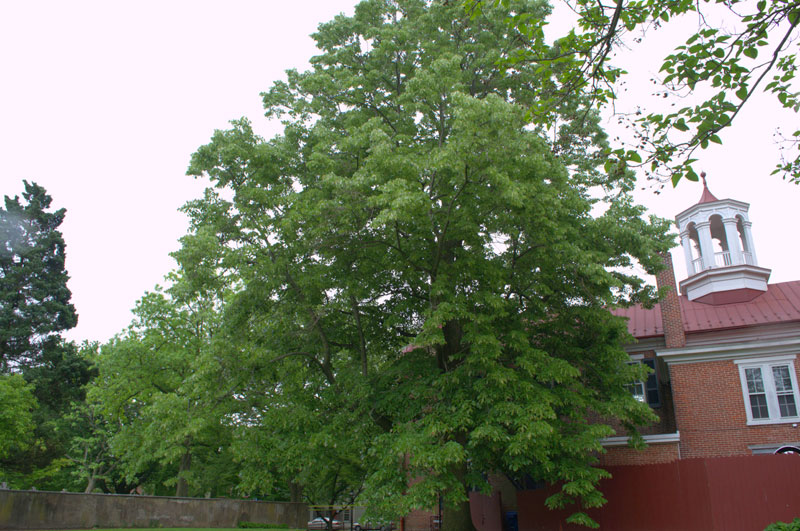 European Linden (Tilia cordata, up to 90′)

Slow growing with a pyramidal shape, these trees have leaves that are heart shaped and hang upside down on the limb. Lindens are often seen growing along an avenue and provide dense shade. They flower in late June and the blossoms are worked extensively by honeybees for nectar. 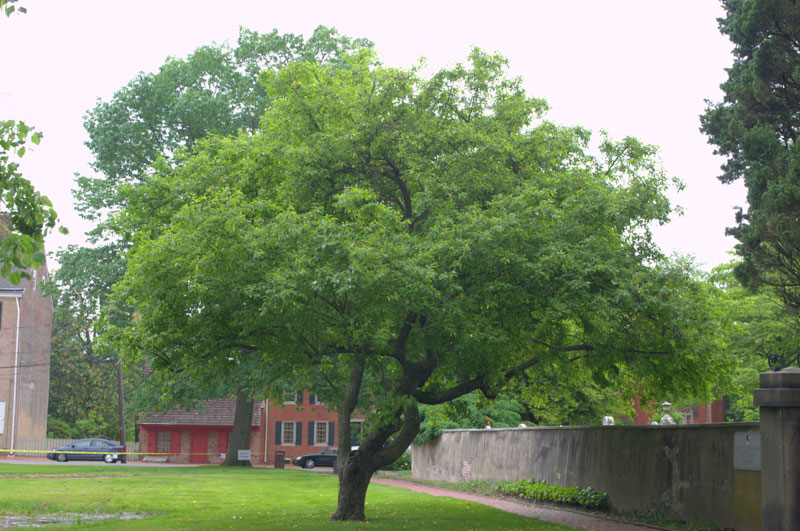 Crabapples seem to prefer moist, heavy soils and bear large crops of fruit, which are eaten by the birds throughout the winter. This is the only crabapple remaining of an original grouping that stretched along the church wall. 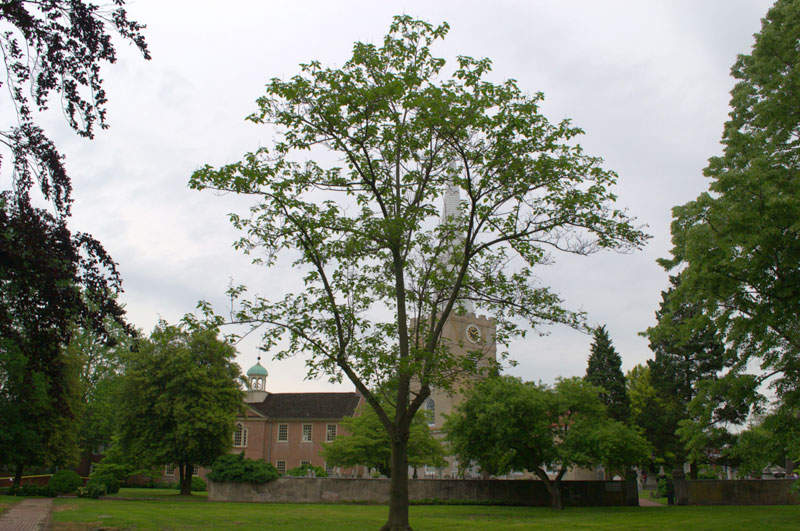 This young tree was planted in place of three older Paulownia trees that had to be removed due to declining health. The potential hazard they posed to the safety of visitors and historic structures on The Green was very serious. This tree was installed in late 1991, and has grown rapidly, such growth being one of this tree’s defining characteristics! The tree was named for Anna Paulownia, a princess from the Netherlands. The wood from the Paulownia is prized in Japan where it is made into ceremonial chests. Paulownias flower in mid-May, displaying clusters of showy violet/lavender flowers. Its large rattling seed pods persist throughout the winter. In the spring it seeds itself freely and new trees seemingly come up wherever they land. 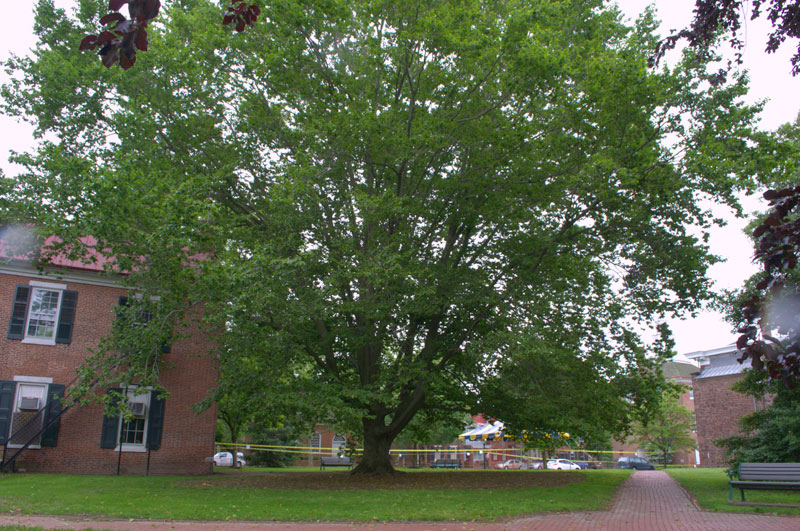 The American beech is a massive tree that has a considerable spread and needs a generous amount of space in which to grow. Children may think that the large trunk of the tree resembles an elephant’s leg and foot (but beech trees live much longer). The American beech is a native of the Delaware woodlands and prefers rich soils, growing well under the forest canopy. The beech is easy to spot in the forest during the winter with its distinctive gray bark and because its tan leaves remain on the branches throughout much of the winter. 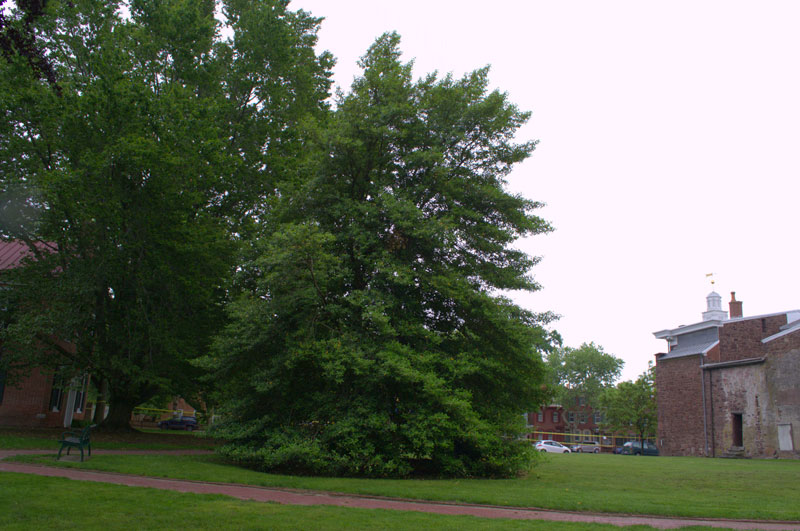 The American holly has the distinction of being the state tree of Delaware and can be found throughout the state, especially in wet woodlands. It is a native tree and the harvesting of its greenery once provided an important source of income for families in lower Delaware where it is prolific. The fresh greens were shipped by railroad cars to big cities for decorating during the Christmas holidays. Wreath making provided a source of income for many rural Delaware families during the Great Depression. The advent of plastic greenery and the growing concern for fire safety brought about the decline in the shipment of fresh holly greens from Delaware. 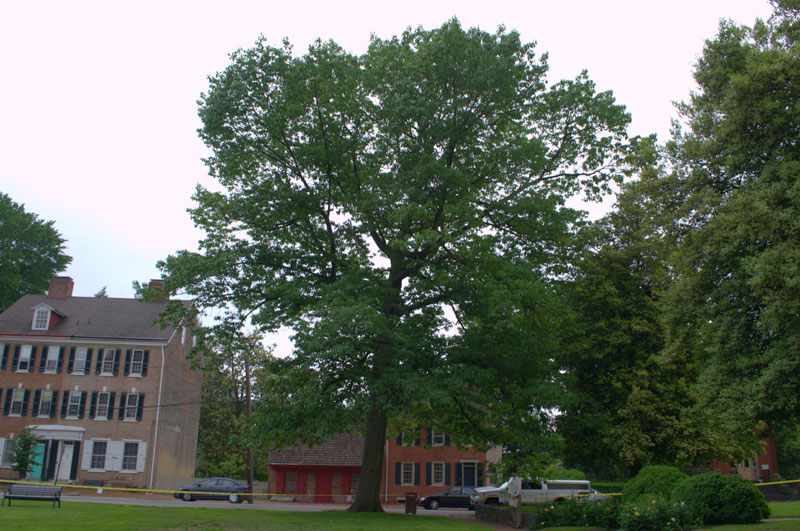 This is one of four red oaks on The Green. Can you spot the other three trees? All of these are infected with a disease called Bacterial Leaf Scorch. The bacteria are transmitted by leafhoppers and once infected, the tree’s water conducting vessels become plugged up. This disease can also be a problem on red maples and sycamores. Trees can show symptoms (leaves with scorched edges) which also indicate drought stress during the summer months. Therefore, laboratory testing of leaf samples provides the only definitive test for Bacterial Leaf Scorch. The disease is a chronic problem for these oaks and we are doing everything we can to maintain their vigor. However, there is no control for the disease and in time, the loss of these trees due to disease may change the character of The Green, in just the way Dutch Elm Disease changed the landscape in the 1930s. 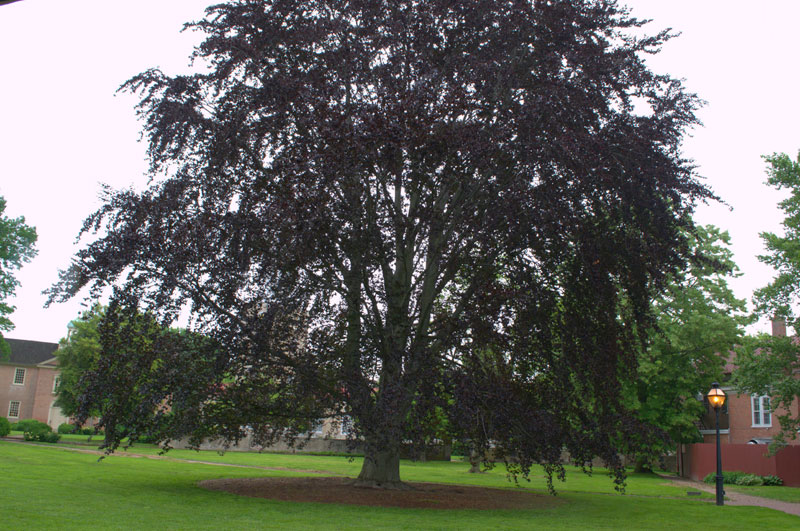 The Copper beech is similar in form and habit to the American beech. Its new leaves, however, are coppery bronze color. It was first cultivated in England in 1836 and is actually a clone of the purple beech. The beech is a very surface rooted tree and almost nothing growing beneath it survives. This is also the reason that both beech trees on The Green have mulch beneath them. The mulch helps to keep the exposed roots protected and encourages water to remain in the soil, helping to approximate the conditions of the forest floor where the beech thrives. 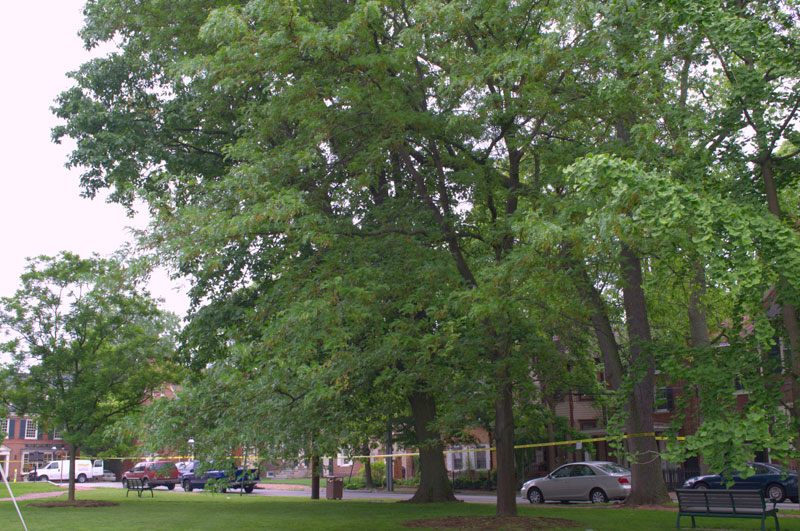 A virtually seedless variety of the common honeylocust, this tree is thornless, unlike its parent. It has a fine vase-shaped silhouette when mature. The tiny leaves seem to just disappear in the fall and require little cleanup. It provides filtered shade, allowing grass to grow beneath it. Planted in the spring of 1991. 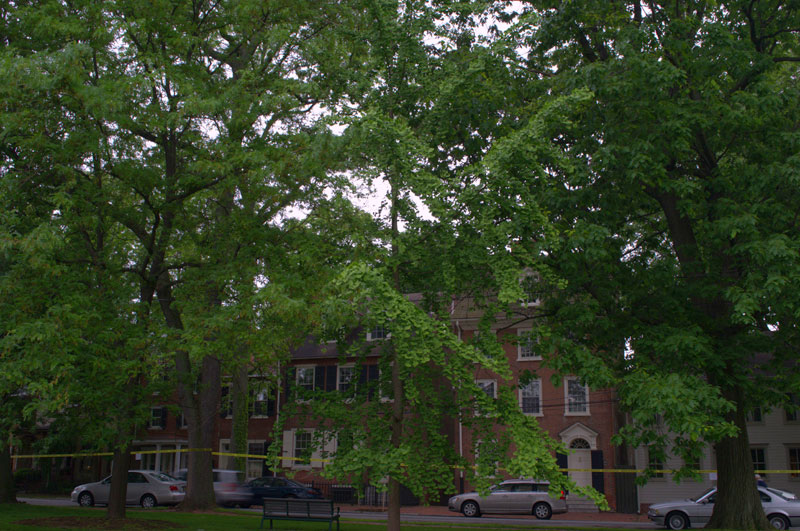 Popular as a city street tree in this country, it was first introduced more than two centuries ago from the Orient. Resistant to pollution and most pests, it has a sturdy pyramidal form. There are male and female varieties of the tree, but it is preferable to plant only the male tree, as the female fruit is extremely foul smelling. It has very distinctive fan-shaped leaves that turn a brilliant yellow in the fall. It drops almost all of its leaves in just a few hours in one day every fall! Planted in the fall of 1991. 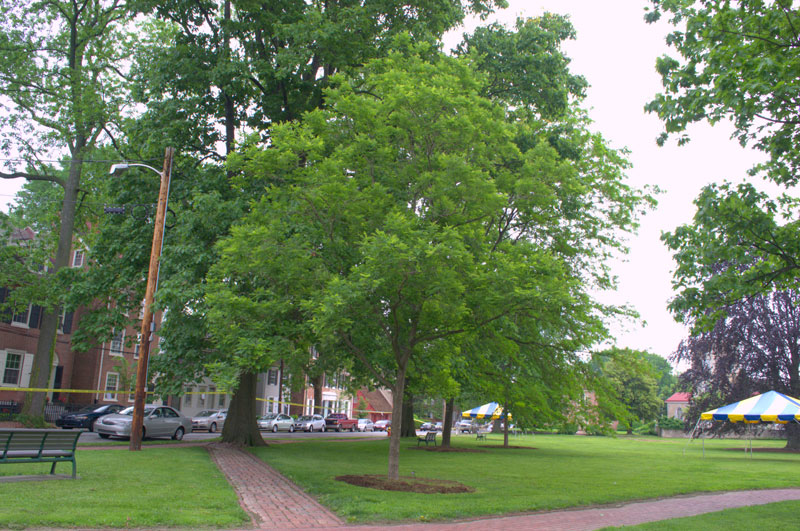 Another great tree for the urban environment, the scholar tree also tolerates seaside conditions. Its flowers are creamy white and hang in long clusters. It blooms in late August when the tree has reached an age of ten to twenty-five years. It is a native of China and appears to be predominately disease and insect free. Planted in the fall of 1991. 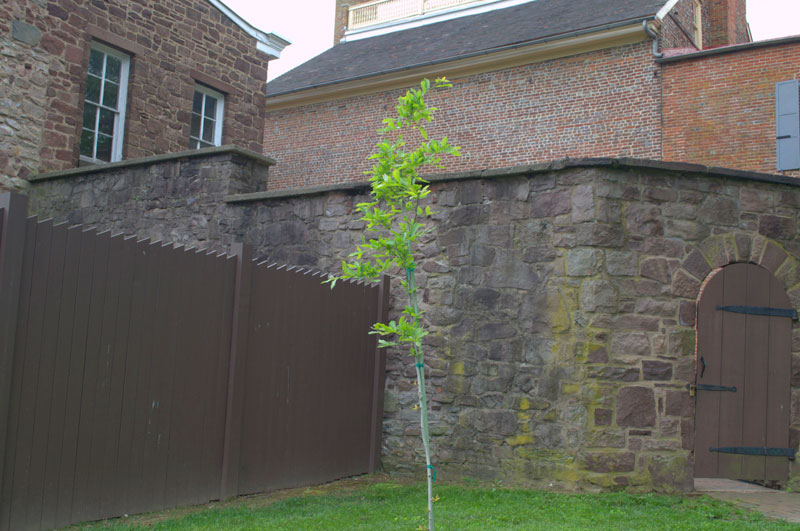 Located close to the back wall of the courtyard, behind the New Castle Court House, this young tree once stood in the shadow of several large Paulownias. Since their removal, this tree has really had a chance to grow. The black gum is common in Delaware’s woodlands and prefers a wet location, but will grow elsewhere. The tree develops deep blue to black fruits from the female flowers and is, therefore, attractive to wildlife. It is the first tree to color in the fall and turns a brilliant red scarlet, tinged with purple. The black gum is easy to spot in the autumn landscape. 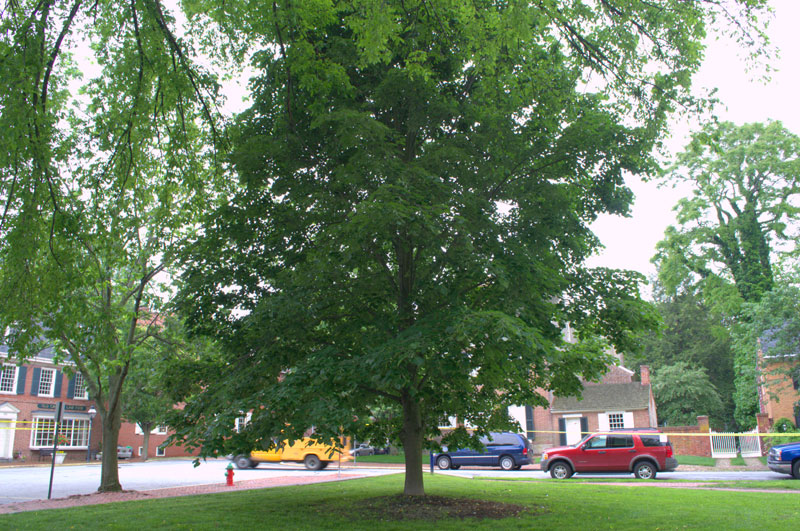 The silver linden is a fine urban tree, which tolerates heat and drought well. Dark green leaves, with silver undersides give this tree a silvery effect when the wind moves the branches. It bears fragrant flowers in late spring. Planted in the fall of 1991. 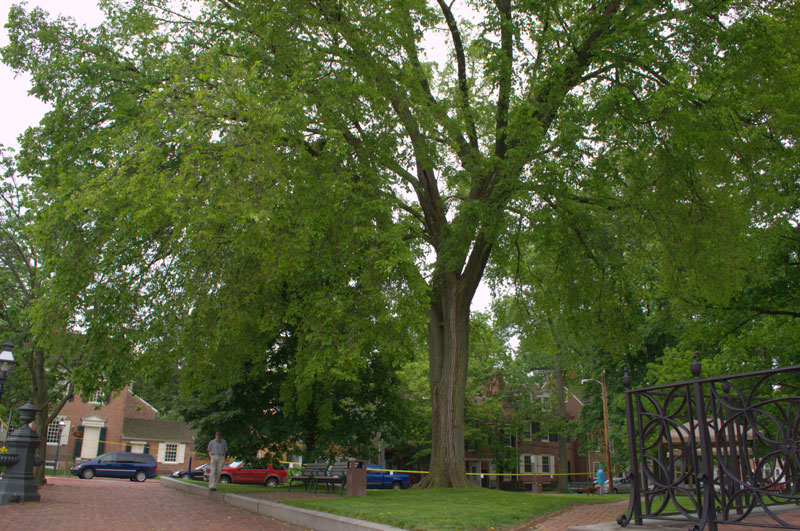 This is the last surviving elm on The Green. At one time The Green was lined with rows of stately elms, running from the Delaware Street side north to the Academy. During the 1930s Dutch Elm Disease ( so called because it was discovered in Holland around 1919) began to decimate the American elm population, both here and throughout much of the United States. By carefully maintaining this particular elm’s health and vigor, it has managed to survive to old age. New varieties of American elm have shown resistance to the disease carried by the European and American elm bark beetle and are now available.