After floods, historic road leveling, house and ferry construction, is there anything left of the 17th century Fort Casimir?

Keep in mind the fort may have been a wooden plank structure built with rammed earth. Those of you familiar with living in Delaware can guess that the termites would have feasted on this within 20 years. Even when the fort was operational 350 years ago, it had to be rebuilt frequently. 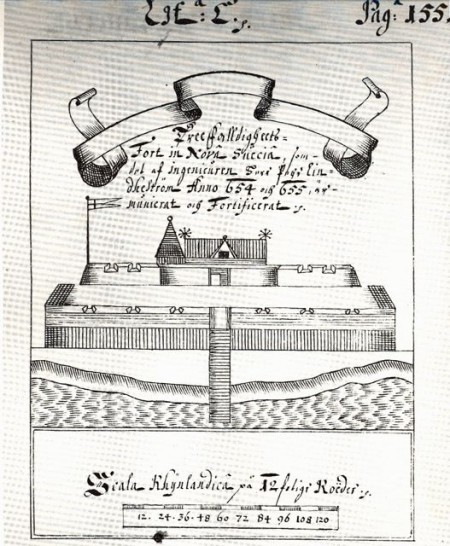 Given the many rebuilding episodes by both the Dutch and Swedes, there may have been several Fort Casimirs. Indeed, when the Swedes rebuilt the fort and named it Fort Trefaldighet (Trinity), they added a gun battery that faced the river.

So, if we were to dig, what would we find? Perhaps some stains in the soils would indicate the presence of decayed wood or refuse. Maybe we could see pieces of pottery, musket parts, or bricks. With funding and encouragement from the Delaware Department of State, support from the Trustees of the Common and the City of New Castle, and the help of many volunteers, it was time to find out.

First, we wanted to find clues of Fort Casimir/Trinity by collecting subsurface data through remote sensing. Ground-penetrating radar was used to detect variation in the soils that could lead the team to cultural features and we decided that a large test trench running perpendicular with the defensive line would be the best strategy to locate the fort and to explore the old shore line.

We were never alone in this search. Ned and Louse Heite found a section of a ditch and 17th c. artifacts in their 5-foot–by-5-foot test in 1986. They photographed their finds and then left modern debris in the backfilled square to guide later archaeologists, as they knew we would follow their success.

Using the radar, we quickly located the Heites’ 1986 test pit and shoveled out the modern fill. Then, we aligned our test trench along the pit to ensure we followed up on the Heites’ findings and to take a look at what lies beneath the sod.

From the Heites’ pit, we extended the trench 10 feet to the west, towards Chestnut Street. A backhoe bucket moved a foot of modern topsoil to expose a layer of brownish yellow clay. After troweling this area off, we noticed some faint stains in the form of two small strips running parallel to each other.

After documenting and digging them out, we thought the stains might be the remains of two very early palisade lines. The base of both these features was in a basin shape common for defensive palisades. As there were no historic artifacts found in them, they appear to predate most historical activity. 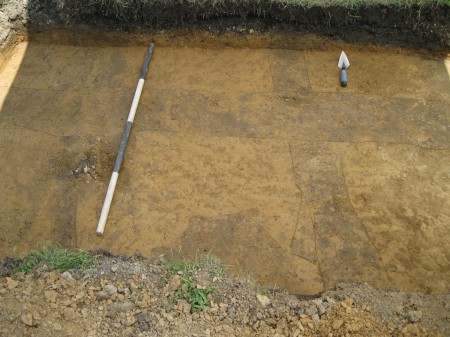 As we dug our trench toward the river, we noticed a lot of modern fill, which overlay Late-Victorian-period fill. It is possible the river bank was gouged out by erosion in the hurricane of 1878, and the town started to rebuild by this aggressive filling activity. 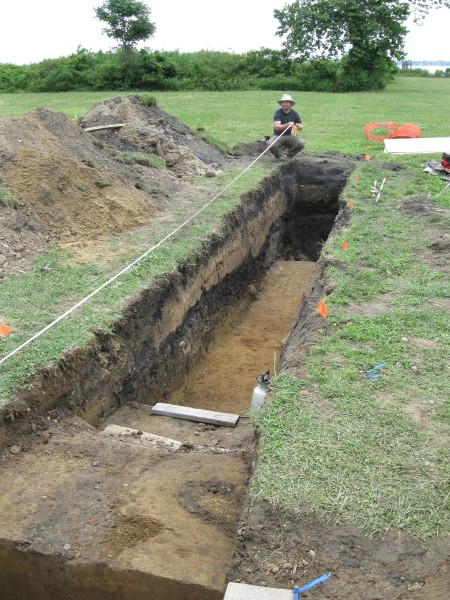 Team members carefully excavated another pit adjacent to the Heites’ from 1986. Indeed, in the ditch they found several layers of Dutch artifacts where we expected them to be. From this zone, we found yellow and red bricks, roofing tiles, a rim of a Dutch dish, and a pipe bowl.  On the military side, we found a fired (flattened) musket ball, and an odd spherical object that I suspect was a grenade. 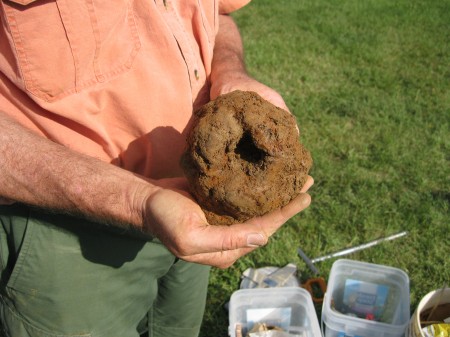 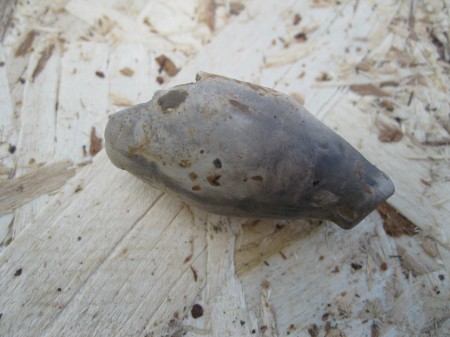 To conclude, I believe we found a section of Fort Casimir/Trinity. We are very lucky it did not erode away in the 1878 hurricane. In the future, perhaps we can follow the palisade lines and see if the bastions, magazines, and barracks also survive. Our analysis has just begun, and the results will be posted in the future.

Archaeology is a group activity that engages a lot of people with diverse backgrounds and temperaments into one common goal. This project could not have happened without the help of many volunteers. People took time off from work and their busy lives to get down and dirty in the trench. I would like to thank the strong support from Lu Ann De Cunzo, Wade Catts, John Bansch, Frank Dunsmore, Teddi Silver, Kitty Johnstone, Ann Persson, Andrea Anderson, Lynn Riley, Jay Custer, and Jim and Mary Atkins. We are grateful for the aid of Oscar Hefting and Hans van Westing of the New Holland Foundation. The Trustees of the New Castle Common graciously allowed us to tear up their land while the citizens of New Castle daily visited us and encouraged us in our task. We are grateful to the Mayor and City of New Castle for providing us with Thomas Bruster and the backhoe. We especially would like to acknowledge James Meek as a partner in this venture, as his study of the Latrobe survey helps explain what happened to the landscape. He displays all of our work for you to see at:  http://nc-chap.org/.

We are grateful to Peter Leach and Bill Chadwick of John Milner and Associates for geophysical work that will become the foundation for future research in the area.  I am grateful to Liz LaVigne for patiently sorting out the artifact bags and my notes.  We really appreciate Ken Darsney and the landscaping team of the DHCA for repairing the park after we sliced into it.

And finally, we would like to thank Jeffrey W. Bullock, the Delaware Secretary of State, for his vision and support of this project.